Rupert Murdoch's well paid news scouts are at it again; for the second time this year the Herald/Sun has made a bold attempt to snatch the Xenox News tag of "Australia's most fair dinkum newspaper".
This time it comes with today's bold page 2 headline "Bears vs Pies live"

Its been at the back of the minds of every fair dinkum footy supporter for a few years now. The clever move by the Brisbane Bears a few years ago to boost their player and membership stocks by suggesting they would call the team the Lions for spell never fooled anyone.

The interim title Brisbane Lions is destined to fade from memory as the fair dinkum newspapers out there start telling it like it is! Its why Xenox News exists; to keep them honest.

Keep at it Rupert; people love reading the truth. (ahh, those were the days, sweat beading on my brow after Dad had left the paper in the dunny; leaving the turf guide open as a decoy to Mum) 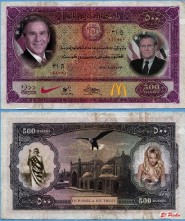 The Week that Was: Strange Occurrences and Alien Visitations