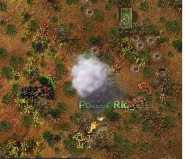 And they all went to heaven in a little straitjacket