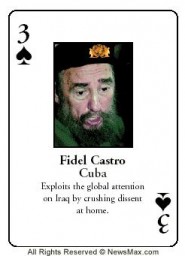 East Timor: What has gone wrong?

I'm reporting to you live from the ass end of the world. That’s right East Timor. Can you believe it? It was only 4 short years ago that Australia liberated this country from the grip of a military dictatorship, but now look at the ruins.

What is especially galling for this correspondent is that the protests of the last few days seemed to have targeted those same institutions that fought hard to give freedom to this impoverished and backward nation: Australians and the UN. It was hoped that the involvement of our diggers would shine a light on a people who have only ever known bastardry and torture; a light to lead them to freedom and all the things a dinki di people love. In fact it was hoped that these people might even start playing cricket!

But no. These same people our brave soldiers defended are now starting to behave like the rest of this blood stained archipelago. No respect for government. No respect for law. No respect for property. They even looted the Food King! And to think that our country was so generous as to allow some of these people a place of refuge during their time of woe!

Australia has always tried to be a fair and good neighbour to the people of our region. Lets face it we are bankrolling the government of New Guinea and most of the other Polynesian states. But what do we get in return? No respect. Just demands for more and more aid. Well my dear readers I believe it is time we took these countries off the tit of Mother Australia. I’m sick of carrying the whitemans burden of the South Pacific. Aren’t you?

No more aid until all these loser countries clean up their act! Fuck. We could all have a 10% tax cut if we stopped throwing money at these backward states.

In the words of that great humanitarian John Lenin let’s imagine. Imagine a GST of 9% and a region where Australia doesn’t have to pay for every hillbilly people that decide they want to be independent.

Write to your federal MP and let’s make this dream a reality.

WHAT CAN THE CUNT OFFER?