It has been all over the TV and the internet - the Olympic torch hounded from one corner of the globe to another.

It is the 'Free Tibet' protests.

Flowers, prayers, and beating up amputees to take away the torch. The usual rent-a-crowd suspects plus a rag-tag bunch of celebrity hacks; they have all been out there declaring their true love for the orange-robed touchy feely Dalai Lama. And now it looks like the belly-rubbing Falun Gong are joining in...

But what exactly are those hippie vagabonds protesting for? Free Tibet? Then what?

Well XenoxNews has got it's hands on a document that details some of the plans for Tibet once the 'Free Tibet' movement gets it way. And it is shocking; what these nutcases envisage is the world's first 'New Age Nation'!

It is a demented litany of half baked theories and some downright dangerous ideas. God help the poor Tibetans if these clowns get anywhere near them!

Some of the goals of these meditating morons include:

1. A positive thinking health system that will eliminate all illness
2. No need for business; imagine yourself wealthy
3. Food prices up? No problem, try the 'Air diet'
4. Crystals for all - concentrate the power of your mind
5. Don't educate your children, send them to a Steiner school instead
6. Solar powered cars!
7. A prayer wheel for every home
8. Declaration of Lobsang Rampa as spiritual leader of all the world
9. Clothes bannned; all most wear 'robes'

It will be what one observer has described as the first fundamentalist Buddhist state. So is this what the 'Free Tibet' loonies are fighting for?

How far will the crazed Buddhist protests go?


Give me communism anyday!

I mean, the sad fact is, one of the reasons why I was arguing against this war was not just that it was based on a lie, but it's a reflection of the reality that was recognized in 1991: If you remove Saddam and you don't have a clue what's going to replace Saddam, you're going to get chaos and anarchy. People continue to say they want the elegant solution in Iraq. I mean, that's the problem, everybody's like, well, we can't withdraw because we got to solve all the problems. 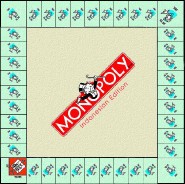 PM appalled: "How can people be so stupid..."