Home  World  Middle East  SADDAM YOUR TIME IS UP! 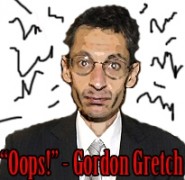 Thanks to pressure from President Bush and like-minded world leaders PMs Blair and Howard it looks like that moribund institution the UN is finally doing it's job! The UN weapons inspectors, who are only there because of pressure from the Bush administration, are finding more and more evidence of Saddam's weapons of mass destruction:

It appears that the Iraqi regime is breaking all sorts of UN resolutions and must face the cost. It was only the steely nerve of President Bush and his supporters that have enabled this to happen. Soon the world will be free of a tyrannical regime that clearly was a threat to world stability and security.

Once again the infantile anti-US posturing of the left has been shown up for what it is; a useless and dangerous policy. If it had been followed Saddam would be free to do what he wanted with dire consequences for not only his neighbours but also the world.

My life is a shambles so I'm growing a beard

THE US MILITARY: ALL BRAWN AND NO BRAIN