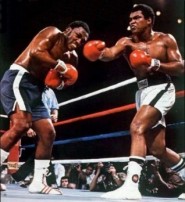 While the bulk of the Iraqi people and majority of the Arab world are furious about the massive US bombardment and invasion of a major Arabic city, looters and criminals rejoice!

Criminals and looters have realised that their ticket to freedom is to yell out 'No Saddam; Yes Bush' whenever confronted by soldiers or TV cameras. Subsequently the streets are filled with the more seedy rogue-like and drunken element amongst the Iraqi population. When confronted by US patrols the rogue gangs spin into anti-Saddam chants and pro US. No ID is required to proceed, all one do is yell out "No Saddam, No Saddam" which in turn brings smiles to the faces of the US soldiers, as well as the US adminstration and citizens watching the pillaging on TV. Abdul 'Yokem' Pillager said yesterday "It's a win/win situation! Yeehaa!"

Silence put together by thought is stagnation, is dead, but the silence that comes when thought has understood its own beginning, the nature of itself, understood how all thought is never free but always old â€”this silence is meditation in which the meditator is entirely absent, for the mind has emptied itself of the past.

I AINT GUNNA WORK ON JOHNNYS FARM NO MORE