U.S. Resident George W Bogus attacked Iraq because he and his oily mates KNEW GOSH-DURN WELL that defunct Iraqi dicktator Saddass Hasbeen had a shitload of WMD that was a CLEAR AND PRESENT DANGER to the world (and far more importantly, the U.S.A.). It was crunch-time. It was do or die. It was them or them! If o­nly!

U.N. weapons inspection team head Hans Blitz asked for more time to dig up the dirt o­n the old Bathist bastard but the petulant Resident had run out of patience.

Rip open another bag of them pretzels, boys and BOOM,BAGHDAD– and about 7000 civilians caught in the mad-dog Yank shitstorm!

Hey, ok, it's getting late I know, but I also know that the weary, leeery, Johnny-Howard-butt-fucked punters of Xenox News enjoy a grim chuckle, so let's hear it again, just o­ne more time, from the U.S. version of the hilarious, punch-drunk (also defunct) Iraqi Minister for Information: yes, your fiend and mine, the thoroughly disreputable Donnie Darko Rumpty Tumpty!

"I don't believe anyone that I know in the administration ever said that Iraq had nuclear weapons."—Defense Secretary Donald Rumsfeld, at a hearing of the Senate's appropriations subcommittee o­n defense, May 14, 2003. 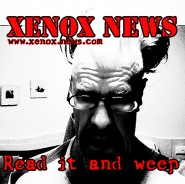