Home  World  Middle East  To Die For: the Greatest Intelligence Hoax of all Time

To Die For: the Greatest Intelligence Hoax of all Time

BOGUS IS AS BOGUS DOES

Remember that butt-ugly, club-footed nazi nutter Josef Goebbel's claim that Poland was preparing to attack Germany in 1939, and hence WW2?

What's that you say? Josef WHO?

But, dear readers, I di-fucken-gress (you can tell I'm feeling a wee bit hissy):

And, to Australia's dying shame, our very own P.M. promptly took his cue, lodged his devious, snooty little shop-keeper’s nose right up Georgie’s sphincter, and did the liar’s lambada on the world stage. Ah, yes, Janet, right THERE!

And now, as we shit and speak, that crazy, bow-legged, born-again Resident of the U.S.A. and the dazed, pissant Prime Suspect of the U.K., Tiny Blur, stand accused of lying (GASP!) about the urgent need to attack Iraq, an illegal war, unparalleled in modern times, a war whose justification appears to have been, as U.S. deputy defense secretary Paul Wacko Wolfoshitz recently fessed up, "for bureaucratic reasons."

The fucken lunatics have taken over the fucken asylum and renovated it in the fucken post post-modern, neo-gothic, neo-con style of George fucken Orwell.

What's that you say? George fucken WHO?

Shee-it (ite)! No wonder the Mendacious Midget is Australia’s teflon-coated PM and a Texan fuckwit s(h)its in the all-powerful, Oval Orifice, the root'n'st, toot'n'st orifice in wild wild West/Waste/Worst, ee-HAH!

Jezus H Kryst! Go take a flying fuck at a rolling donut! I'm going out for pizza. With HEAPS of fucken anchovies! 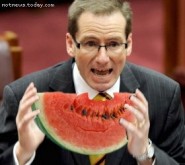 Baghdad is NOT Munich!