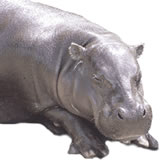 A group of Islamist Pygmies has been located hiding out in a ramshackle shack shacked up with a bevi of woman purported to have been part of the 1992 Australian Olympic hockey team.

The shack, located in the Blackstone Ranges (between the western and great Victorian deserts), is situated in surrounds described by Senior Constable Pringle as 'a small oasis where bush tuckers are in plentiful supply'. 'We saw a couple of these blokes come into town last month but thought they were a couple of short blokes from the local aboriginal tribe. I guess we should of twigged when they bought out all of the Macaroons from the corner store'

There was also a left over plastic container that appeared to have contained 'Bhaba Gounoush' (Eggplant Dip) found in a rubbish bin which Alexander Downer last night cited as clear evidence that the tribesmen are Islamic Fundamentalists.

'We are now certain that the tribesmen were smuggled into the country by Al Qaeda as part of the international Islamic hockey player insemination program. The Koran also outlines the pivotal role of the African pygmies in the defeat of the Carthaginian general, Hannibal, during the Punic Wars between Carthage and Rome.'

The group of girls are reported to be in a stable condition and in good spirits after their ordeal. After a fruitless search for their hockey sticks they were taken by journalists to the Gunbarrel Hotel where they are awaiting further questioning by authorities.

All governments are liars and murderers.