We will only win this war if we untie our hands

So a few heads got broken trying to protect coalition soldiers from attack.
Well we better wake up and smell the coffee:
WE ARE AT WAR! That's right. There are people in this world who want to steal our way of life away from us. They ain't scared to kill innocent women and children for their bug-eyed causes. For them all human life is expendable.
However we are expected to fight this war on terror but not hurt anyone!

What if some of these prisoners revealed information about an attack on Aussie diggers in Iraq? Or. god forbid, a Madrid-like bombing in Australia? Would you say we couldn't use it? Would you place the rights of the terrorists above the brave men and women of Australia's armed forces?

Being in Iraq has shown me that now is not the time to cut and run.

Now is the time to take the gloves off and show these evil people whose the boss!

Time to tell the mad Mullahs of Tehran and fascists from Damascus to butt out of Iraq!

Time to fight for freedom.

It might take decades as PM Howard says (and we can only hope that he can lead us during this time), but we will win the War on Terror by being tough now.

It will save the pain later. Pain in London. Pain in New York. And who konws, maybe it will stop the pain in Sydney.

Learning is not child's play; we cannot learn without pain 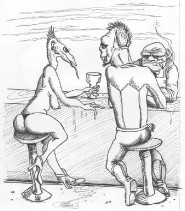 Where is the rain?