No Care, No Responsibility: Superb Job!

Private First Class Dickhead, or is there someone else directing traffic in Iraq, Afghanistan, Guantanamo Bay and… the United States of Amurderer.

Oh, right, that’s the system where the Red Cross tells you there’s widespread abuse throughout the US-controlled prisons of Iraq, and you say, shh, it’s all “part of the process”.

And then, when the media gets wind of a secret US Army report on cruelties at one such prison - and shocking, irrefutable photos hit the world’s TV screens - you jump up and shout:

“IT WORKS, I TELL YOU, THE FUCKING SYSTEM WORKS, HALLALUJAH! AND OH, BY THE WAY, I’M SO FUCKING DISGUSTED BY THOSE PERVERTED PHOTOS WHERE CAN I GET A POSTER FOR MY OFFICE!”

As if they didn’t know (OK, maybe Powell, because he’s such a spinning jar-head - and black – and maybe Condy, because of that weird hair-do and she’s a chick… and black)!

I mean, WHO authorized the illegal attack on Iraq in the face of global opposition and public outcry, hmm? 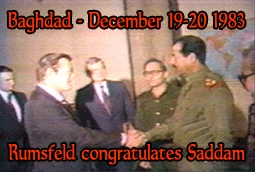 Confirming their own complicity in the sadistic cruelities inflicted upon Iraqis imprisoned by US forces in Abu Ghraib, the oily Bushies have been broadcasting fulsome love letters for ranting Rummy.

In a weekend statement Vice-Presidevil Dick Cheney reckoned Rumsfeld was the nation's “best Defence Secretary ever” and people should “get off his back” and “let him “get on with his job”!

As one war-criminal to another, the Shrub praised Rummy even further: "You are courageously leading our nation in the war against terror. You are doing a superb job. You are a strong Secretary of Defence, and our nation owes you a debt of gratitude."

Osama bin Laden flew the coop and is Christ-knows-where and his popularity among angry, disaffected Muslims has never been greater.

Afghanistan is a bloody basketcase and opium production there is now at a record high.

The American Constitution is in tatters and Americans are apparently comatose on the subject of their own fading, precious “inalienable rights”.

Almost 800 US troops have died in the Bushies occupation of Iraq, and more than 4,000 wounded (Christknows how many are crippled for life!).

The cost of the US occupation of Iraq war is projected to reach $150 billion by 2005, a blow-out three times greater than what the White House had originally claimed.

The number of “coalition troops” in Iraq is about one-third of what is needed to accomplish ANYTHING (according Rand Corp).

And with the body count in Iraq growing (anytime anywhere), on 30 June the US Army of occupation is going to hand over WHAT to WHOM!?!

Like, that sort of “superb”? Jesus, Joseph and Mary, Rummy shouldn't be getting a pat on the head, he should cop a boot in the arse!

But I guess the Titular Texan should know what he’s talking about.

As governor of Texas, Bush Junior did a “superb job” himself, executing 152 jailbirds and thus becoming the deadliest governor in the history of the USA.

And don’t talk to Dubya about multiculturalism! Ethnic minorities, many without access to legal representation, comprised a big chunk of those dead-men-walking that Bush signed-off on. Just for starters, he executed a bloke who hadn't even had access to his own country’s consul (as is required by the Vienna Convention on Consular Relations, to which the US was a signatory).

“Texas did not sign the Vienna Convention,” said Bush. “So why should we be subject to it?”

Maybe Texas wasn’t a part of the USA then but by golly, it sure is now though, ain’t it, pardner!

Ah, but now I see where current US foreign policy is coming from! 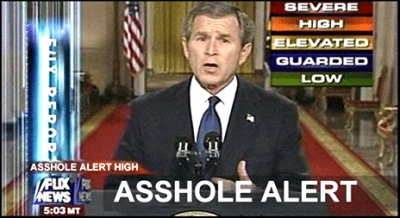 In the words of former US Army Colonel Dave Hackworth, in his article Hanging Out the Troops: “As a former professional soldier, I’m appalled not only by what has happened in the prisons there, but also by our military leadership. From the very top of the Pentagon down to the 320th Military Police Battalion, the brass have spent months covering up obscene behavior while placing the sole blame on Joe and Jill Grunt.”

(You may want to read the rest of Hack’s spray at http://www.hackworth.com/)

Gobsmacked at the gushing praise heaped by the White House upon a demonstrable whacko, Arabic media commentators say the damage from images seen worldwide of soldiers abusing stripped Iraqis would be “indelible, incalculable and a gift to al-Qaida leader Osama bin Ladin”.

And the US hits in Iraq just keep on coming!

US Authorities HAVE admitted that between 70% and 90% of all Iraqis detained by the US Army were held “by mistake” (THE SYSTEM WORKS, HALLALUJAH!)

How many of those “mistakes” involved cruelties inflicted by US personnel at Abu Ghraib and elsewhere?! I mean, 70% innocent of any “crime”! 90%?! Oy, get the fucking manager in here, pronto! 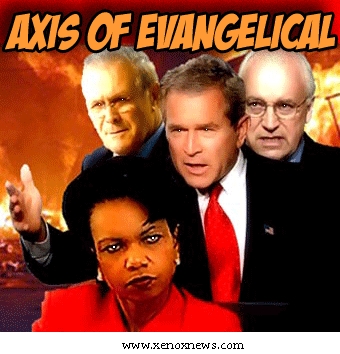 But that’s not the worst example of careless US excess in Iraq. The worst US war-crimes have received far less scrutiny - especially in the US news media - than the snapshots of young, dumbass Reservists getting their sicko rocks off at Abu Ghraib (under orders, you understand!).

In the words of one 72-year-old Iraqi who lost almost his entire family to US bombardment: “How would President Bush feel if he had to dig his daughters from out of the rubble?”

Can you imagine the US hue and cry (and by definition, the uncannily identical warbling of UK and Australian suckerfish too!) if anything like this had occurred under a unilateral invasion by say, Indonesia, of say, Timor Leste?

Oh, yeah right, the Indons DID invade, oppress, maim and murder the East Timorese. And none of the above noble members of the current Coalition of the Witless uttered more than a peep. Australia is even doing its best to screw that impoverished new nation out its only real natural resource: offshore gas and oil fields.

AH, but back to Saddam’s old torture chamber, under new management! 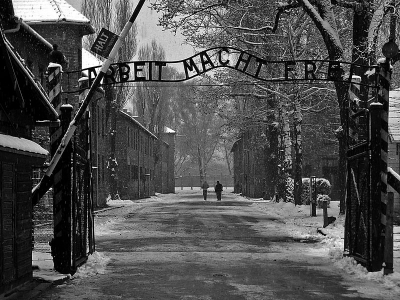 Imagine this: what if the nasty old Soviet Union had invaded Iraq – or even the nasty New Russian Republic - what then? There’d be a duststorm of epic proportions as indignant US leaders started waving their neglected copies of all the international statutes the US currently ignores. Gosh durn it, pard, they’d be so pumped up with affronted humanitarianism they’d just about bust a goddamn lung, yessiree!

And just in case you think that just maybe – just maybe - ordinary old Joe Yank is thoroughly sickened by the holiday-of-a-lifetime snapshots coming out of Abu Ghraib, allow me to cite a recent CNN poll (yeah, I know, I know, slurpy CNN).

The CNN question was "Is torture ever justified during interrogation?" The US response (Got a brown paper bag handy?): 47% approved. A little on the high side for a nation claiming its global preeminence as the greatest, most powerful democracy, a shining example to the rest of us benighted, underprivileged non-Americans.

And remember, occupying Iraq has NOTHING to do with the so-called "war on terror" - that was always just the pretext. It was always about securing Middle East oil supplies for the US and relocating the military base the Yanks established in nervous Saudi Arabia during Saddass Hussein's invasion of Kuwait.

In fact, back then the rotten Saudi royals paid the US $50 billion to chase Saddass back to Baghdad! And this after declining Osama's offer of using his fanatical Afghan fighters to do the job for free! The hilarious irony of this is that it was the Saudi royals who had given Saddass generous support in the first place, just like the Yanks! 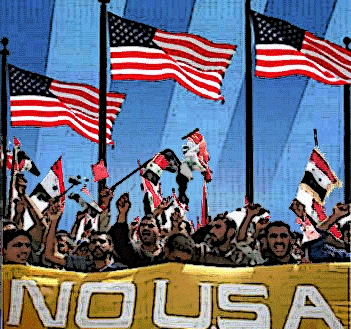 As for the 11 September passenger plane attacks, 15 of the 19 hijackers were Saudis! Jesus wept! The US invaded the wrong fucking country!

The oily Bushies have opened one corker of a can of worms. Or is it a Pandora's Box?

Whether the shameless Shrub in the Oval Orifice wins or loses the November poll, his legacy is pretty bloody clear. It is, in the words of commentator Fareed Zakaria: “the creation of a poisonous atmosphere of anti-Americanism around the globe."

This was Max Gross for xenoxnews.com, and all I want to know is where does the fucking buck stop, why is my chainsaw on the kitchen table, and who took my last bloody beer? 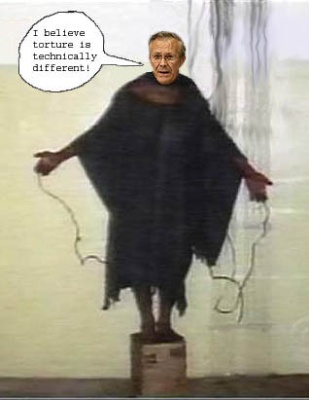 Luff the helm, embrace your faith come what may, Who cares if a project thrive or decay!

There is a guy who wants to fuck me

Abbott, Jones & the Convoy of Crackpots

THE SEAT OF THE COMMON SENSE