Almost two years ago now the criminal Bush Regime defied its allies, the U.N., world opinion and international law to blunder into Iraq.

Amerikkka’s purported aim was to expose Saddass Hussein’s alleged vast “stockpiles” of chemical, biological and – the most ludicrous Bush claim of all – NUCLEAR Weapons of Mass Destruction. Now, 100,000 dead Iraqi innocents later, the deranged U.S. Presidense is poised to swindle American voters again, using mindless “patriotism” to sell his snake-oil. And this from a spoiled, wealthy butthead who dodged the draft during the Vietnam War years.

Obscenely, the twisted Texas Shrub and his cronies used the tragedy of 11 September 2001 as an excuse for unprovoked warfare against a former U.S. protege.

But every Bush claim regarding Saddass has been exposed as a distortion, manipulation, or outright lie. Most recently, the Shrub’s very own, hand-picked Iraq weapons inspection team merely confirmed what terror analysts, war critics and U.N. inspections had previously concluded: no such WMD existed in Iraq.

Sickeningly, many Yanks still just don’t get it. They think Saddass had a hand in 9/11. They think Saddass’s WMD exist and WERE found. They probably think the sun circles the earth – if, that is, their holy-rolling preacher told ‘em so!

Like our very own arse-licking Rodent PM of Surrealia, Gorge W Bush and his evangelist goon squad have never let facts interfere with their propaganda.

Mission accomplished, y'all? Having deposed Saddass, occupied Iraq and sponsored an imported puppet Prime Minister, not o­nly have entire weapons facilities been dismantled and spirited away by unknown opportunists, but also 350 tonnes of conventional military explosives – that’s about 40 truck-loads! – have been stolen from right under Bush’s long, growing nose.

Despite the White House rebuff arguing ordnance went missing prior to the Amerikkkan invasion, U.S. broadcaster ABC has aired embarrassing footage taken by an embedded cameraman that confirms barrels containing the explosives were present when Yank troops went through the arms depot concerned, now empty.

Every missing kilo will probably be returned, in o­ne form or another! 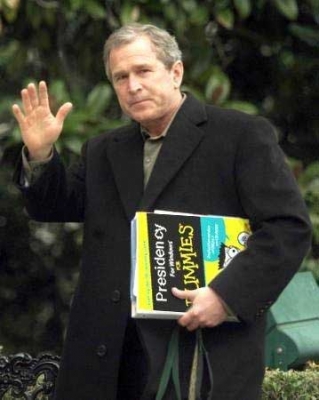 Given the growing civilian and military body count, the countless maimed, the o­ngoing destruction and insecurity, o­ne can o­nly conclude that the feckless, perfidious “born-again” U.S. Presidense Gee Whiz Bush is secretly working for al Q’aeda!

This was Max Gross for xenoxnews.com, pissing in the wind, whistling in the dark, and spitting blood.

Joe recognized a fellow corpse, a compendium of gestures, intonations and expressions painfully rehearsed and reenacted.