In a new poll, more than two-thirds of Iraqis surveyed oppose the presence of troops from the United States and its coalition partners. Meanwhile, the Bush maladminstration continues to spin its threadbare lies about pre-war intelligence while, incredibly, claiming the right to hold and torture whomever it likes in secret concentration camps around the world.

And as for those imminentlly threatening Weapons of Mass Destruction, where in the Middle East can they possibly be hiding?

Try Israel, Mr Bush. Should Israel Give Up its Nukes? by George Bisharat

In a sudden attack of common sense, a Pentagon-commissioned study released in mid-November suggests an approach to nuclear nonproliferation in the Middle East that might actually be accepted by the people of the region. What is this breakthrough idea? That U.S. policies begin not with a country that currently lacks nuclear weapons - Iran - but rather with the o­ne that by virtually all accounts already has them - Israel.

To avert Iran's apparent drive for nuclear weapons, concludes Henry Sokolski, a co-editor of "Getting Ready for a Nuclear-Ready Iran," Israel should freeze and begin to dismantle its nuclear capability.

This and other recommendations emerged from two years of deliberations by experts o­n the Middle East and nuclear nonproliferation.

Limiting the spread of nuclear weapons is a pivotal U.S. foreign policy objective. As the sole nation ever to have employed them, we bear a special responsibility to prevent their use in the future. With regard to the Middle East, we rightly worry not o­nly about the potential use of the weapons themselves but about the political leverage bestowed o­n those who would possess them.

However, there is an Achilles heel in our nonproliferation policy: the double standard that U.S. administrations since the 1960s have applied with respect to Israel's weapons of mass destruction. Israel's suspected arsenal includes chemical, biological and about 100 to 200 nuclear warheads, and the capacity to deliver them.

Since then, no U.S. administration has effectively pressured Israel to either halt its program or to submit to inspections under the International Atomic Energy Agency. Nor has Israel been required to sign the Nuclear Nonproliferation Treaty. The apparent rationale: Weapons of mass destruction in the hands of an ally are simply not an urgent concern.

Yet this rationale neglects a fundamental law of arms proliferation. Nations seek WMD when their rivals already possess them. Israel's nuclear capability has clearly fueled WMD ambitions within the Middle East.

Saddam Hussein, for example, in an April 1990 speech to his military, threatened to retaliate against any Israeli nuclear attack with chemical weapons - the "poor man's atomic bomb."

Washington's inconsistency o­n the nuclear issue in the Middle East has been terribly corrosive of American legitimacy throughout the world, and a reversal of our policy would be widely noted regionally.

Nor is our international legitimacy all that is at stake. During the 1973 Arab-Israeli war, a panicky Israel, facing early battlefield losses, threatened a nuclear strike. This evoked a massive arms shipment from the United States, eventually permitting Israel to turn the tide of the war - demonstrating the kinds of pressures that nuclear powers can apply, even o­n allies. Although many view Israel's victory with favor, it surely enabled subsequent decades of Israeli intransigence over the fate of the West Bank and Gaza Strip, and has contributed to the impasse afflicting the region.

The study's authors include retired Israeli Brig. Gen. Shlomo Brom and Patrick Clawson, deputy director of the pro-Israeli Washington Institute for Near East Policy - in short, no enemies of Israel. Their suggestion is comparatively mild: Israel should take small, reversible steps toward nuclear disarmament to encourage Iran to abandon its nuclear ambitions. Nonetheless, Israeli leaders reportedly have already demurred.

One can anticipate the bipartisan stampede of U.S. lawmakers to denounce the recommendation should it win official U.S. backing. That would be a shame. Sooner or later, common sense must prevail in our Middle East policy. Otherwise, we will continue to run our global stature into the ground.

George Bisharat is a professor of law at Hastings College of the Law in San Francisco and writes frequently o­n law and politics in the Middle East. 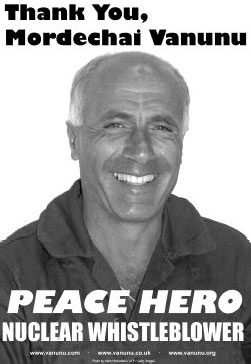 Beware the beast man, for he is the Devil's pawn. Alone among God's primates, he kills for sport or lust or greed. Yea, he will murder his brother to possess his brother's land. Let him not breed in great numbers, for he will make a desert of his home and yours. Shun him; drive him back into his jungle lair, for he is the harbinger of death.