A recent article by Seymour Hersh has got the latte-sipping lefties in a tizz. They want to believe that President George W Bush is about to nuke Iran.

Well they should all take a bex and have a lie down...

Iran is undoubtedly a threat to the civilised world, as this diagram details.

To allow it access to nuclear weapons would be the height of madness. President Bush has said he will not allow them to have these weapons, and this hard line is supported by all the members of the UN Security Council.

It is only the rantings of the anti-American leftists like Chomsky, Gross, and Chato, who disagree with President Bush on this point.

The report from Hersh is obviously the result of the selective release of intelligence by the US as a way of ratcheting up the pressure on the Mad Mullahs.

But remember there are many ways to skin a cat!

Another way to stop Madmanahmed and his terrorist cronies in Iran getting their hands on nuclear weapons is to remove these tyrants from power.

This would enable the down-trodden masses of Iran, yearning for freedom and free enterprise, to take their future into their own hands. And removal of the diabolical clique that runs Iran would also remove a major supporter of the terrorists attacking democracy in Iraq.

Democracy, the deceitful theory that the Jew would insinuate, namely, that all men are created equal. 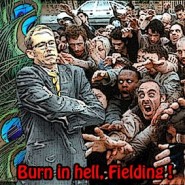 Chuck is a nice bloke? XN makes a public apology.

RICARDOVITZ ANNOUNCES CANDIDACY FOR 2010 (or thereabout)