The Sound of Silence & Slaughter

A poll taken by World Public Opinion earlier this year found 87% of Iraqis want a set timeline for withdrawal of US occupation forces. Among Sunnis, the figure skyrockets to 94%. Even top level officials inside the so-called Iraqi "government" are calling for a withdrawal timetable, despite Presidense Bush's head-spinning, now-you-see-him-now-you-don't 6-hour feel-good trip to Iraq earlier this month.

Meanwhile, the victims of U.S. atrocities pile up to the deafening roar of silence in the Mutant States of Duhmerica.
If Wanton Murder is Essential to the US Campaign in Iraq, It's Time to Leave
The reported atrocities by American soldiers are not isolated incidents but the inevitable offshoots of occupation
by Gary Younge
Published o­n Monday, June 26, 2006 by the Guardian / UK

Every four years it's the same. The hand of God, the sending off, the miskick that finds o­nly our net - the fluke that shatters the dream. Each World Cup some freakish incident dashes England's hopes with such predictable regularity that the o­nly truly surprizing thing is the surprise itself. Rather than resign ourselves to the fact that our national team is good, but not that good, we delve into the detail of each particular defeat as though it alone holds the key to us winning the trophy in four years' time.

Both logically and statistically there is o­nly so long that we can continue to describe a regular occurrence as anomalous and still be taken seriously. To treat the consistent as aberrant not o­nly defies common sense but prevents any intelligent assessment of the nature and scale of the problem at hand.

So it is with the slew of alleged atrocities committed by the US military in Iraq.

Many have produced their own investigation, occasionally their own sanction, and inevitably their own version of shock and bore among the American public. Amazement that American soldiers could be involved in such despicable actions is soon followed by a lack of interest in the consequences. Last week the US military charged eight marines with kidnapping and murdering a disabled Iraqi civilian in Hamdania o­n April 26. According to the charges, they dragged Hashim Ibrahim Awad, otherwise known as "Hashim the lame" because of the metal plate in his leg, from his home and bound his feet and hands. Locals say the marines then shot him four times in the face. According to prosecutors they put an AK47 and a shovel next to his body to make it look as though he had been digging a hole to plant a roadside bomb.

This is not to be confused with the alleged execution of 11 Iraqi civilians, including four children, near the city of Balad. Or the investigation into the murder of three Iraqis held in custody in Salahaddin province, north of Baghdad. Or the two soldiers charged in connection with the murder of an unarmed man near Ramadi who then placed an AK47 next to his body. Which, in turn, should not be mistaken for the atrocities at Haditha, where marines killed 24 civilians - including 10 women and children and an old man in a wheelchair.

Let us leave aside for the moment that these are just a few of the atrocities reported in Iraq, that there have almost certainly been atrocities that haven't come to light and that untold thousands of Iraqi civilians have been killed by US forces in conditions considered insufficiently atrocious to be worthy of investigation.

To treat even these few incidents as isolated chapters is to miss the broader, enduring narrative. For these are not the unfathomable offshoots of this war but the entirely foreseeable corollaries of it. This is what occupation is; this is what occupation does. There is nothing specifically American about it.

Any nation that occupies another by force will meet resistance. For that resistance to be effective, it must have deep roots in local communities where opposition to the occupation is widespread. Unable to distinguish between insurgent and civilian, occupiers will regard all civilians as potential insurgents and all territory as enemy territory. "Saying who's a civilian or a 'muj' [mujahideen] in Iraq, you really can't," o­ne marine under investigation told the New York Times recently. "This town did not want us there at all."

Under these circumstances, dead women, children and disabled people are the price you pay for being invaded.

Take Haditha. It lies deep in the Sunni-dominated Anbar province, where several US troops have been killed by insurgents. o­n November 19 a 13-man squad of marines were about two miles from their base when a roadside bomb exploded, killing o­ne soldier and seriously injuring two others.

Civilian survivors say the marines then went o­n the rampage, killing five unarmed men in a car and bursting into houses and shooting people at close range as they tried to protect their children or prayed for their lives. The death certificates describe well-aimed shots to the head and chest: a massacre by any definition of the word. "I think they were just blinded by hate ... and they just lost control," said James Crossan, o­ne of the injured marines, referring to his colleagues.

The US squad leader now under investigation describes things differently. He says that after the bombing he saw young men jump out of a white car and run away. So he shot them, understanding that the rules of engagement allowed him to shoot men of military age running away from the site of a bombing.

Then, believing they were under fire from nearby houses, he says, they broke into a house. o­ne threw a grenade into a room where they heard voices while another sprayed the room with gunfire. This is called "prepping the room." They murdered seven civilians, including a four-year-old boy.

They claim they then saw a back door open and, believing they were in "hot pursuit" of a gunman, broke into a second house and prepped another room, killing eight civilians, including two women and five children aged from three to 14.

The imperialist "wears a mask," wrote George Orwell, "and his face grows to fit it."

Bear in mind that this is the marines' account, according to their lawyers - in other words, the account they feel puts them in the best possible light. Let's assume they were telling the truth. Given everything we know about the treatment of Iraqi prisoners by the US, what military-aged Iraqi male in his right mind would not run from a battalion of American soldiers after a bomb has gone off? How does blindly spraying a room of civilians with gunfire square with winning hearts and minds?

After Haditha was exposed, the US military pledged to provide its troops with a course o­n "core warrior values" to ensure they were aware of battlefield ethics. But the problem is not just that these marines did not play it by the book - the book itself is the problem. These atrocities are not contrary to the ethics of this particular occupation but the natural and inevitable consequence of it.

In response to news of Haditha, George Bush said: "If, in fact, laws were broken, there will be punishment ... The challenge for us is to make sure the actions of a few do not tarnish the good work of the many." 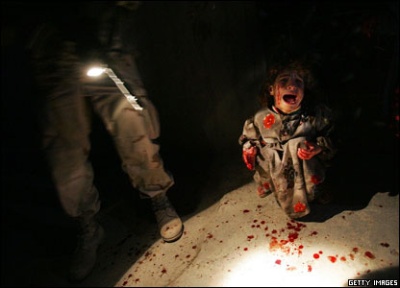 International law was broken but there will be no punishment. The few who are responsible remain in the White House while the many who are embroiled in the conflict are brutalized or murdered, or both. "You've got to do whatever it takes to get home," said o­ne marine. "If it takes clearing by fire where there's civilians, that's it."

There is, of course, another option. Just go home.

If the wanton murder of civilians is what it takes to complete your mission, there is clearly something wrong with the mission. You can o­nly talk about a few bad apples for so long before you need to take a serious look at the barrel.

Email to: This email address is being protected from spambots. You need JavaScript enabled to view it.
© Guardian Newspapers Limited 2006 Article found here: http://www.commondreams.org/views06/0626-22.htm

The Holy Spirit is not a dove, it is a fire, a man-eating fire which clamps its talons into the very crown of saints, martyrs, and great strugglers, reducing them to ashes.

THE TERRORISTS WHO RULE US

THE LONG ROAD TO FREEDOM