Friday, 14 July 2006 By Patriot
Reports have surfaced that the 2 Israeli soldiers brutally kidnapped by terrorist organisation Hezbollah may be transported to the capital of world terrorism; Tehran. Hezbollah has long been known as the 'cats paw' of the rogue regimes of Syria and Iran, and only act when their commanders in Damascus and Tehran let them off the leash. It seems that leaders like Madmanahmed are trying to not only destabilise Iraq but the whole Middle East. They have heard the bleating of the latte-sippers of the West (ie Max Gross, Pilger, Chato et al) and think that they can win the War on Terror and also destroy Israel. 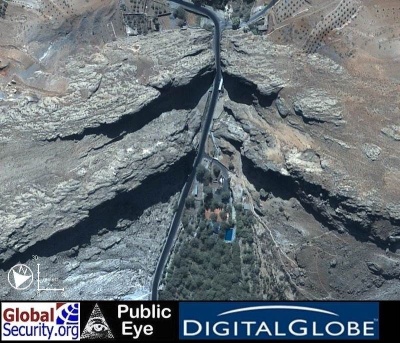 One of the many terrorist training camps in Syria.

However one thing they can be sure of is that the trio of brave World leaders, President Bush and PMs Howard and Blair, will not allow these tyrants to inflict terror on the Middle East or damage that beacon unto all nations Israel. It is becoming each day clearer that this War on Terror is a fight for freedom and enlightenment versus superstition and evil. The tyrants of Tehran and Damascus have been emboldened by the terrorist activity in Iraq and are spreading their poison of terrorism all over the globe. We cannot afford to back down and appease them; our actions must be strong and ruthless.

Our way of life depends on it.

Tyranny is a habit; it is able to, and does develop finally into a disease.