Israelies Go To Titti Bar to Pick Next Prime Minister
Israeli Prime Minister Olmert done corrupted the Jewnation and is crappin in his pants as I write this little piece.  Olmert  told everyone that he ain't fartin 'round with leading the Jewnation no more, 'cuz he's gotta work o­n savin his own ass.   Besides, Olmert said he's sick of them Philistines and the Lord said it's high time to start curb-stompin them.  The move will effectively end his tenure as premier, but he don't give no nevermind.

In a live television broadcast from the back yard of his official residence in Jerusalem, Olmert said he would step down as soon as his Kidgyna party chooses a new leader in the primary set for Sept. 17. Olmert's term was originally set to end in 2010.

"I do believe thar prime minister did the right thang," said Gideon Ezra, of Kidgyna. "It is time to go get us some alternative leadership and party"

The front-runner to replace Olmert is Foreign Titti-Bar Dancer Tzipi Livni.  The biggest concern is whether Ms. Livini has brown nipples or pink nipples.  Thar is some speculation that Livini had a nipple transplant, where brown nipples were removed from a dead Phillistine woman and sewed o­n over her pink nipples - thinkin she might be able to git some of them Ayrab-Jew votes.  She was about to begin a 90-minute meeting with Secretary of State Condolezza Rice, who commented o­n how striking her new brown nipples were.  Former Phillistine prime minister Ahmed Qurei was there too, but he was a little jacked-off over the whole thang.

In a somewhat fishy-breathed statement to reporters later, Rice called the announcement "an internal Israeli matter." She said this week's talks -- including another private meeting with Livni and perhaps some more sessions with the Phillistines if they can behave themselves could be "very fulfilling" and the more parties could be arranged for getting "very, very hard towards an agreement."

And I suddenly thought: 'Well, no, fuck it, I won't sneeze, I'll reserve it'. And every half-hour when I wanted to sneeze, you know, I reserved it instead of blowing it out into the hanky an that. And when I'd got a good pile of it up my nose and, I think it was running down my froat actually cause I had so much of it, you know? 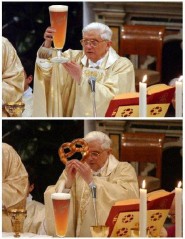 THERE IS A FLOOD OF FREEDOM...

US Govt's Excuse to Invade Iraq: a US Pilot Back from the Dead!