So who's winning the terrorists' world cup?

In the globalised free market, shouldn't the US encourage the trend towards sponsorship in terrorism?

When the Americans were announcing this year's list of countries guilty of "sponsoring terrorism", they read them out as if it was the draw for the World Cup. I expected a commentator to say: "Oh my goodness, Iran and Iraq in the same group. That's certainly going to be a tense contest between these two terrorist veterans." Or: "Syria, the favourites there but you can never write off the plucky little Sudanese guerrillas." Then came those patronising little afterthoughts, that Iran and Syria had shown improvement, as if this was a school report. The complete version probably read: "I am very pleased with Syria's progress, though at times it still lacks concentration and funds a hijacking or a Hizbollah raid." But they must have got stick from the others. Cuba probably jabbed Iran in the arm and said "Oo, superpower's pet now, are we?"

Anyway, in this world of the globalised free market, shouldn't America be encouraging the trend towards sponsorship in terrorism? It's an untapped market. Just as a terrorist is about to blow up a bus, he could announce: "This suicide bombing is brought to you from Legal & General." Or the name of a movement could change each season, like the football league, so one year it could be the "Axa and Equity Law Intifada", then the "Rowntree Fruit Pastilles Holy Jihad".

The Cubans must be slightly irritated at appearing on a list of terrorist states, given that the country that produced the list has formulated more than 300 plots to assassinate their president. The Americans could be accused of acting with a tinge of hypocrisy here. It's as if they announced they were invading North Korea because it's got too many fat people, or bombed Sudan because there was too much shouting on its daytime television programs.

For opponents of terrorism, they have some odd habits. The New York Times journalist Thomas Friedman, who's just won his third Pulitzer prize, offered a typical line recently when he suggested that in Iraq "we should bomb one of their power stations every week." You might not agree, but it's quite a courageous stand, as such blatant advocating of terrorism must surely land him in Camp X-Ray by the end of the week. There are those who suggest that Americans aren't terrorists because they don’t hijack planes or carry out suicide bombings. But that's because they don’t have to. If Osama bin Laden had owned a fleet of Stealth bombers and a canyon-full of cruise missiles it might have changed his military strategy as well.

The other strange part about the announcement of this list is that it came two days after George Bush's statement that US intelligence was picking up the same signals it was getting before 11 September, and expected another attack. So they found out everyone was in danger from terrorists, just before they were due to tell us which countries are full of terrorists and may need to be bombed. What a coincidence. They make it up as they go along. Next they'll tell us they've averted a plan for a suicide hang-glider to fly into David Blaine on his pole.

If the signals last time did suggest an attack, that leaves the question of why it wasn't stopped. Asked about this, Bush replied: "You know what's interesting about Washington? It's a town, unfortunately." Yet virtually the whole media goes along with the line that he's proving to be a capable president who's grown in stature in this international crisis. Why didn't the BBC's American correspondent shout: "That's fascinating, Mr Bush, because up until now we were all under the impression Washington was a box of bloody tomatoes. What the hell are you talking about, you madman?"

It has now been admitted that US intelligence was alerted to the fact that a number of people had signed on to flight schools, saying they weren't bothered about learning takeoff or landing. Which leads to the conclusion that both sides are pretty dim. Next we'll find out that when the hijackers bought their tickets they asked if they could have a discount, as they wouldn't be going all the way.

Not only that, but I seem to remember Western politicians and armchair bombers celebrating en masse on the grounds that the bombing of Afghanistan had left al-Qa'ida daisy-cuttered into the mountains. Now it seems they're just as capable as before of launching another attack. And whenever the US defence is asked how much longer they'll be in Afghanistan, they turn into a minicab firm. "Two minutes mate. We're just round the corner. Just mopping up and we'll be with you in a moment."

Now Bush is coming to Europe, where the fawning will be as great as ever, though I'd love to hear the conversation he's going to have with the Pope. "Mr Bush, these people you've been bombing. Are any of them unborn?" "No, certainly not, your Vaticanness, our forces make sure that everyone they kill has been very much born." "Then you have my blessing, my son." 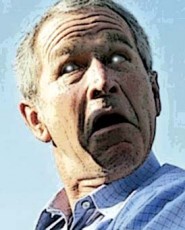