So you think that some news reports are not always accurate? (Present company accounted for)

Compare the following videos for more evidence of how full of shit Fox News is.

Here is what happened posted on this citizen video: Watch.


And below is how Fox News takes the same video, chops it up, and then has an anchor person (cunt) who is quite happy to stare at the camera and twist an incident beyond recognition in support of the 1%ers.

Check how they edit the bit out where the white shirted cop walks up and maces the rounded up girls who are doing what they were told.

This cunt Megyn Kelly also adds creative speculation that the girls were pushing the orange plastic away and the bald headed prick spouts out all of this other nonsense about how they are harming "the rest of us" by standing on the sidewalk. Meanwhile "the rest of us" are copping it in the neck because of the corporate shysters who are getting rewarded billions of dollars for fucking up the global economy. 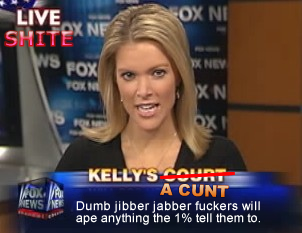 So there you have it. That is Pox News for you. The handbook for the majority of Americans.

Now piss off, go and buy a 21st Century Fox bluray or pay 18 bucks to watch one of their movies with a 7 dollar coke on ice. (Don't forget your hip flask)