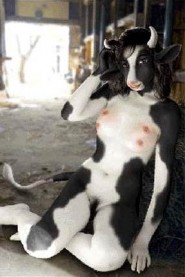 "With the emergence of Republican crony capitalism, western religion has raised its supernatural head for the last time, in an effort to control the world and the reality we live, in the name of the few, in blindly approaching its own prophetic end.

Bush and several of his cronies, hack religious "theologians," are self-ordained as agents of "god" in the implementation of a "crusade" against "evil" and self-proclaimed warriors in the battles of the apocalypse.

In keeping with its apocalyptic vision, the Bush administration's last hurrah for religious despotism is already dead in principle, and current evolutionary frameworks, when extrapolated into tomorrow, would suggest that it is not going to be very long lived."

Read this fascinating piece by Dr. Gerry Lower of
Keystone, South Dakota, in its entirity at http://www.bushwatch.net/bushh.htm#evolution