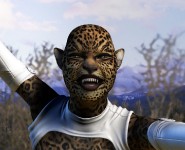 As hurricane Rita - the third most intense Atlantic hurricane on record - heads for the Texas coast, forcing about 1.3 million people to evacuate, the frighteningly out-of-touch U.S. President and his creepy jesus brigade are no doubt thanking the lord for his latest bounty. Jehovah must surely have something special in mind for this pious, peace-loving faux cowboy's home state!

Or is it possible that, after the shock and awe of the Bush gang's obscene New Orleans fiasco, perhaps even they are wondering whose side 'god' is really on.

Or perhaps not. After all, grasping reality is not one of Dubya's strong points. Disney on Parade
by Maureen Dowd

The president, as he fondly recalled the other day, used to get well lit in New Orleans. Not any more.

On Thursday night, Mr. Bush wanted to appear casually in charge as he waged his own Battle of New Orleans in Jackson Square. Instead, he looked as if he'd been dropped off by his folks in front of a eerie, blue-hued castle at Disney World. (Must be Sleeping Beauty's Castle, given the somnambulant pace of W.'s response to Katrina.)

All Andrew Jackson's horses, and all the Boy King's men could not put Humpty Dumpty together again. His gladiatorial walk across the darkened greensward, past a St. Louis Cathedral bathed in moon glow from White House klieg lights, just seemed to intensify the sense of an isolated, out-of-touch president clinging to hollow symbols as his disastrous disaster agency continues to flail.

In a ruined city - still largely without power, stinking with piles of garbage and still 40 percent submerged; where people are foraging in the miasma and muck for food, corpses and the sentimental detritus of their lives; and where unbearably sad stories continue to spill out about hordes of evacuees who lost their homes and patients who died in hospitals without either electricity or rescuers - isn't it rather tasteless, not to mention a waste of energy, to haul in White House generators just to give the president a burnished skin tone and a prettified background?

The slick White House TV production team was trying to salvage W.'s "High Noon" snap with some snazzy Hollywood-style lighting - the same Reaganesque stagecraft they had provided when W. made a prime-time television address from Ellis Island on the first anniversary of the 9/11 attacks. On that occasion, Scott Sforza, a former ABC producer, and Bob DeServi, a former NBC cameraman and a lighting expert, rented three barges of giant Musco lights, the kind used for "Monday Night Football" and Rolling Stones concerts, floated them across New York Harbor and illuminated the Statue of Liberty as a backdrop for Mr. Bush.

Before the presidential address, Mr. DeServi was surveying his handiwork in Jackson Square, crowing to reporters about his cathedral: "Oh, it's heated up. It's going to print loud."

As Elisabeth Bumiller, the White House reporter for The Times, noted in a pool report, the image wizards had put up a large swath of military camouflage netting, held in place by bags of rocks and strung on poles, to hide the president from the deserted and desolate streets of the French Quarter ghost town.

The president is still looking for a tiny spot of unreality in New Orleans - and in Iraq, where a violent rampage has spiked the three-day death tally to over 200.

The Oedipal loop-de-loop of W. and Poppy grows ever loopier.

With Karl Rove's help, Junior designed his presidency as a reverse of his father's. W. would succeed by studying Dad's failures and doing the opposite. But in a bizarre twist of filial fate, the son has stumbled so badly in areas where he tried to one-up Dad that he has ended up giving Dad a leg up in the history books.

As Mark Twain said: "When I was a boy of 14, my father was so ignorant I could hardly stand to have the old man around. But when I got to be 21, I was astonished at how much the old man had learned in seven years."

Of course, it's taken Junior only five years to learn how smart his old man was.

Bush père did make a real mistake in responding slowly to Hurricane Andrew in 1992, but that blunder has been dwarfed by what the slothful son hath wrought. Because of his fatal tardiness, W. now has to literally promise the moon to fix New Orleans and the rest of the Gulf Coast, driving up the federal deficit and embarking on the biggest spending bonanza and government public works program since F.D.R.

In his address from the French Quarter, the president sounded like such a spendthrift bleeding heart that he is terrifying the right more than his father ever did.

Read my lips: By the time all this is over, people will be saying that Poppy was the true conservative in the family.