Home  Life and Style  Lifestyles  Plunged into a nightmare of horror and deception.

Plunged into a nightmare of horror and deception.

Something was under my bed. Something bad. I tried to jump out of the bed, but something was
crushing me onto the bed with an inhuman strength.
A sensation of paralysis moved down from my chest
and froze my legs.

The image of a man dressed as a priest surrounded
by a green glow drifted through the wall riding a
motorized lawnmower. Something was not right.
Maybe he wanted to shred my crucifix.

I heard angels chanting hymns, and I struggled to
pray, but a terrible croak was all that emerged.

The glowing priest fixed his eyes on my crucifix
and let out a hellish howl that shook the
foundations of my soul.

After ages of unspeakable horror, Jesus appeared
disguised as something cute, yet conservative in
some way.

Jesus lifted up his eyes and said, "Father, I
thank thee that thou hast heard me." Jesus leered
as he gazed at me, his ugly smile showing his huge
fangs that were dripping with hate and
anticipation.

That is the dark silver lining in this blood-spattered cloud we have brought down on ourselves, and it leaves a lot to be desired. It is almost impossibly morbid to brood on how many young Americans will have to come home in bodybags before the great American voter catches on to the fact that it's the same greed-crazed yo-yo who slit the throat of the U.S. economy in the name of Tax Cuts, who is responsible for all the feverish war-mongering gone wrong. The whole thing sucks. It was wrong from the start, and it is getting wronger by the hour. George W. Bush is doomed to the same cruel fate his papa suffered only 10 years ago. 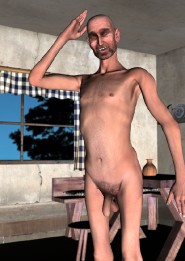 SHIT! I'VE GOT A HAIR IN THE GATE!