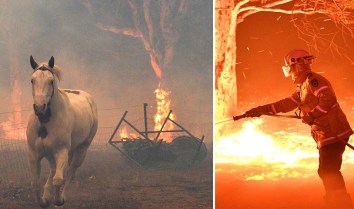 BURNING DOWN THE HOUSE

LNP scorched earth agenda ramps up after scraping back into government

Raving reporteur for Xenox News, Max Gross, strikes back after two weeks of lying under the dining table in abject despair amid the post-election blues!

There is a scene in Beneath The Planet Of The Apes where the last surviving “intelligent” humans are praying in the nuked remains of a cathedral and, in a moment of awful revelation to the long-suffering Nova and Brent as a nuclear missile rises from a silo underfoot, pull their faces off to reveal the grotesque, skinless reality beneath human-looking masks: these “humans” are deranged mutants intent of destroying the entire planet and everything on it.

That’s precisely how I felt when early on Election Night it became obvious that not only had Labor lost the “unlosable election” but that interim PM Morrison – the cack-handed Pentacostal nutter, that smug, barking, smirking used car salesman and interim leader of the raving rightwing wingnut LNP – had won.

My fellow Australians were revealed as grotesque freaks intent on destroying the world.

Read more: BURNING DOWN THE HOUSE

Another year, another Aussie election.

XenoxNews.com has been here so long that we have covered heaps. Over the decades our correspondents have been beavering away, bringing you dear reader, the best in political writing. Insightful and hard-hitting, with no punches pulled. We have always told the stories the others keep hidden. To find out more check out our archives here...

“Budget surpluses or deficits are not economic decisions forced upon us by economic ‘facts’. They are political decisions. Decisions around the level of taxation (revenue collection), service provision (government spending), inflation and unemployment are also political decisions – not economic ones” – Kay Rollison, 14 February 2015, Debt and Deficit Duplicity, http://theaimn.com/

“There is a generation, whose teeth are as swords, and their jaw teeth as knives, to devour the poor from off the earth, and the needy from among men” – Proverbs 30:14

“Poverty is the worst form of violence” – Mahatma Gandhi

Well, damned if I was going to waste my time listening to that rabid feckin' junkyard dog Scutt Morrison sprewk the usual LIEbral bullshit as they kick the poor and pander to the rich so I watched an episode of Heston Blumenthal doing weird shit to food on SBS-on-Demand instead.

Later, I turned to the news online and got no further than "Mr Morrison said..." before my gag reflex kicked in.

You can no more win a war than you can win an earthquake.