Tsunami of Terror to hit Sydney!

A massive earthquake in the Solomon Islands has sparked a tsunami warning for Australia's east coast including Sydney. Residents have been warned to move to higher ground as the expected 5cm waves could hit at any time.


One Sydney resident told XenoxNews that he hoped Australia's own King Canute would head to the beach and order the waves back.

"We all know the Australian PM Howard has powers beyond that of mortal man. I say he should stand on the beach and order the waves back!"

With that the very Reverend Chato hoped into his kombi van and drove as fast as he could for the Blue Mountains.

The holy ghost was working through me in this film; I was just directing traffic. 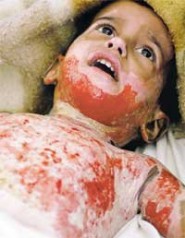 WHAT ARE THE MAD MULLAHS OF TEHRAN UP TO?