ISRAEL THROWS HORSESHIT AND WESTERN MEDIA LAP IT UP

Well it turns out that video of rockets being launched from Qana wasn't near the building that got bombed. And it wasn't even from the same day Qana was bombed. No rockets were launched from that area on that day.

Just another lie from the Israeli propaganda machine.

The Israeli government knows that its lies will be believed; they can read our glorious free press and see that it repeats everything they say as the truth.
What is the truth?

The Israeli government want to ethnically cleanse South Lebanon and have a pliant NATO/COW force there guarding it for them. The message of the Qana bombing for the people of South Lebanon, as it has been from all their strikes on civilian targets, is to get out or you will be killed.

It's as simple as that.

The Israeli armed forces have killed more civilians than any other armed force in the Middle East. That is an undisputable fact.

This War on Terror is a fucking nightmare from which we will only wake up when cunts like Howard and Bush and Blair are kicked out of office.

It’s going to get a lot worse.

Those dickheads are planning to go all the way to Tehran. They don’t care how many more people they have to kill before they can proclaim they have brought “freedom” to the Middle East. 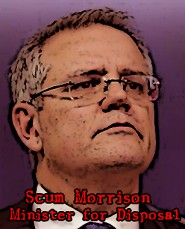 Diary of a Sad Man

GOOGLE BANS XENOX NEWS - THE END OF FREE SPEECH ON THE INTERNET?