This time it is claiming that the nation's jobless rate is at an historic low, with current figures indicating 5.1 per cent unemployment.

Peak welfare groups know from first-hand experience that these statistics are fraudulent and do not reflect the true rate of unemployment in the community.

And as we all know, truth is not something the Howard Government is keen on.

The Howard Government would choke on the truth. At least that's what those of us living in the real world are all hoping for.

Marriage is a wonderful institution, but who would want to live in an institution? 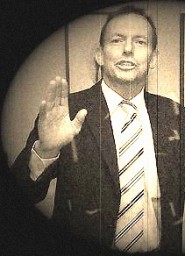