Home  World  Middle East  As the Great Wheel continues to grind and revolve...

As the Great Wheel continues to grind and revolve...

The massive budget blowout includes an iniquitous new "aid" package for Israel to help it destroy all hope of a sovereign Palestinian state.

Confirming that the US considers itself a potential war criminal, the Bill also strictly bans US co-operation with the International Criminal Court, set up by the United Nations to prosecute genocide and other crimes against humanity.

$A26.91 billion - half of the entire budget - will go to the Department of Defence.

$A7.05 billion will be spent on "security" at the nation's airports.

$A10.21 billion on helping New York recover after the September 11 attacks (What, lots and lots of posters of a forthright Presidunce Bush?)

An extra $A324.74 million goes to the FBI for its counter-terrorism activities (The same ones that failed to put two-and-two together regarding threats against the now obliterated Twin Towers). 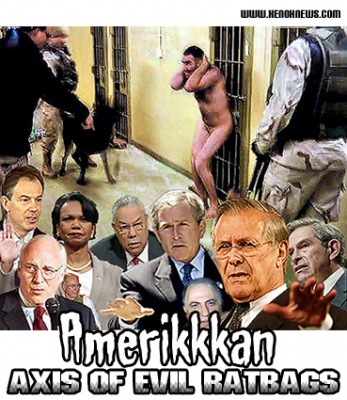 With Israel continuing to defy UN resolutions against illegal Jewish settlements that take up much of Palestinian territory, the US war chest hands the repugnant Sharon government $A371.13 million in extra assistance to "combat international terrorism" (i.e. Palestinians).

The long-suffering residents of the West Bank and Gaza will receive $A92.78 million in humanitarian aid birdseed, with strict prohibitions of assistance to the Palestinian Authority (i.e. the Palestinian government).

$A204 million is showered on bankrupt countries of the former Soviet Union, primarily Kyrgyzstan, Uzbekistan and Tajikistan, which give the US access for their military misadventure in Afghanistan.

Most significantly, this new legislation restricts US participation in international peacekeeping missions unless US servicemen are exempted from the jurisdiction of the ICC.

Exempt US military personnel from charges of war crimes? Like, what if, uh ? hypothetically speaking - a US helicopter gunship in, say, Afghanistan, massacred 50-odd innocent civilians celebrating a wedding?

While Presidunce Bush and his venal cronies eye a US invasion of Iraq as a passport to re-election (not that he was actually elected), hateful poisons ferment in the veins of humanity.

This was Max Gross, counting the cost of corporate corruption, watching world blue chip and commodities prices, predicting a Dead Kennedys revival and the total collapse of the US economy. Sell. Sell now!

The characters in 'The Cold Six Thousand' have great depth, tragedy and grandeur but I am an American Protestant artist and I judge these characters sternly. They are morally judged at every step of the narrative.