U.S. Pretzel George W. Bush would have us believe that under his eagle eye a second Al Q’aeda attack on a U.S. skyscraper was foiled just weeks after the 9/11 catastrophe. Given his record of misinformation, distortion, deception and outright lies, Xenox News readers are right to dismiss his latest P.R. stunt as just another dead red herring.

Looking solemn, cross-eyed and severely constipated, the Shrub made his latest faux announcement in a clumsy attempt to justify his administration’s illegal domestic spying activities, to distract an increasingly hostile public from the grisly Iraq gridlock, and the embarrassing resurgence of the Taliban in Afghanistan.

Unable to even get the name of the purported terror target right, Washington’s Resident Evil claimed “young men from South-East Asia” had planned to hijack an passenger plane and crash it into the tallest building on Amerikkka’s West Coast, Liberty Tower in Los Angeles, in late 2001.

Denying linkage between these convenient revelations and the Shrub's desperate defence of his secret spying activities on U.S. citizens, White House media drone Scott McClalaland contradicted himself by admitting that the Busheviks had fast-tracked declassification of this latest bullshit in "at least three weeks", coinciding neatly with the warrantless surveillance scandal when it blew wide open.

The sad thing is, GWB simply cannot be believed anymore. Because of the Bush administration’s pathological inability to speak the truth, any attempt to realistically address the threat of terrorism and related criminal acts will continue to be undermined. Thus: the phoney “War of Terror”.

And so to the big fat fucking elephant standing smack dab in the middle of the Oval Orifice that nobody mentions anymore.

The supposed instigator of the 9/11 atrocities, Yosemite Bin Laden, escaped the U.S. invasion of Afghanistan and remains at large. Still, he must some kind of incredible bloody genius if the Shrub reckons ailing old Binny can threaten another 9/11 from whatever Pakistani hole-in-the-ground he’s hiding in. Then again, I guess OBL can just leave the snowball rolling to the regrouped Taliban and the ever-growing pool of fresh terrorist trainees earning their stripes in the Iraqi proving grounds so thoughtfully provided by George W. Bush and his band of merry maniacs.

Iraq, where the number of non-combatant Iraqis being killed and maimed by U.S. firepower borders on the genocidal., and Amerikkkan Democracy is as much a mirage now as it was before the U.S. occupation. Will somebody PLEASE get that lynch mob organised and get to Washingtoon asap so that sanity can prevail!

In an article in the latest issue of Foreign Affairs, the CIA's national intelligence officer for the Near East and South Asia from 2000 to 2005, Paul R. Pillar, confirms what most of us knew years ago: the Bushevik fanatics disregarded the intelligence community’s expertise, politicised the intelligence process and used unrepresentative data in faking the case for attacking Iraq.

Hell, a senior Iraqi minister is on record as saying the butchery is worse now than it was under the dictatorship of Saddass Hussein. Now that’s what I call a historic milestone! Or should that be “mill stone”? 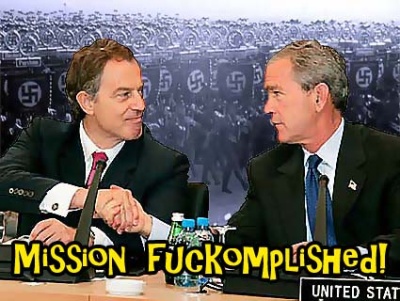 And the grotesque ironies just keep on coming.

Diskin is quoted as saying, "When you dismantle a system in which there is a despot who controls his people by force, you have chaos. You get what happened in Iraq. I'm not sure we won't miss Saddam."

And if there’s any doubt out there that GWB really is the most dangerous idiot in the world, check this out:

New reports reveal that the Bushevik policy of threatening military force against Iran ignored official intelligence estimates going back donkeys years, estimates that consistently warned Iran's fear of a U.S. attack to be a major motivating factor in its pursuit of nuclear weapons.

Joseph Cirincione, a non-proliferation specialist at Washington’s, Carnegie Endowment for International Peace, recently nailed the issue when he said "No nation has ever been coerced into giving up a nuclear program, but many have been convinced to do so by the disappearance of the threat."

And if you think all those rampaging Muslim fanatics screaming for the blood of a few Danish cartoonists is just an over-reaction to caricatures of their so-called “Prophet Mohammed”, then you’d best get thee to a library and research the history of Western meddling, theft and murder in the Middle East.

Iraqbodycount.net currently estimates civilians reported killed by military intervention in Iraq at a minimum of 28,403 and a maximum of 32013.

And that’s not including UNICEF’s figure of some 500,000 Iraqi children who had died during 12 years of U.N. and U.S. economic sanctions, reinstated after the Gulf War in 1991 and ending with the Bushevik invasion in 2003. All thanks to Amerikkkan bombing of Iraq's electrical plants, water facilities and civilian infrastructure. And the bombing continues, along with the cold-blooded massacre of innocents...

Half a million kids! Gee, I guess that showed that awful nasty tyrant Saddass Hussein who the good guys are! 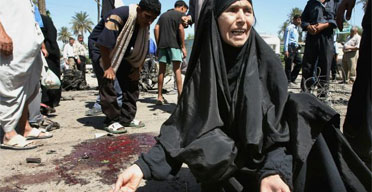 Hey Yanks! Your taxes at work!