Television personality Ian "Turps" Turpey has once again found himself at the centre of another Office of Fair Trading investigation this time for promoting a nasal spray that "makes you taller". The widespread investigation is seen to be part of a crackdown on celebrities who represent fraudulent products following revelations by the wife of comedian Dave Grey that the erection pills he spruiks don't work.

"Dave hasn't had a stiffy in years" she claimed.

Other celebrities to come under the microscope are television chef Ian "Hewey" Hewitson who's just signed on as a spokesman for a fitness group who transformed him from an average fat bloke into a champion marathon runner in only three days.

"It was a miracle" says Hewey who now claims to run "three or four marathons a day" and at one stage had his sights set on the Olympic Games.
"I really wanted to go to Athens" he said with a hint of regret "but then I remembered that I promised the wife that I'd mow the lawn that week so unfortunately it was no go".

Star of television show "Getaway" Katrina Rowntree has also been receiving unwanted attention after claiming that she'd aquired the IQ of Einstein and the wisdom of Plato after watching a twenty minute instructional video.

"I know things now that I never knew before like the shortest distance between two points is a straight vine" said the beaming Rowntree who suddenly became less confident of her new found genius on hearing of the OFT investigation.

"Why would the Office of Fur Trading want to speak to me?" she asked.

Chief investigator for Fair Trading Brian Cavill has looked at both cases and found there to be discrepencies amongst the celebrities claims.

"Ian Hewitson couldn't walk to his letterbox without assistance let alone run a marathon and Katrina Rowntree is as thick as pig shit"he said.

The more you explain it, the more I don't understand it.

Attr. to Twain by R. H. Jackson (attorney) but I think Twain actually said something slightly different but I have forgotten what it was. 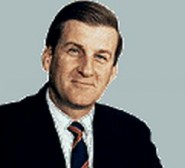