Not content with a highly acclaimed support song, and a ground breaking global protest video to accompany it, indie-pop artist Tara Hack has today released a YouTube video tracking her "Free Schapelle Corby" tour around New York City. Back home, however, it appears that censorship has raised its ugly head.

The City of Liberty Confronts Censorship

The tour takes in a range of landmarks, including the Statue of Liberty and Times Square. Tara is filmed performing in various locations, including Penn Station, with cuts to images of Schapelle in her prison cell, and dozens of 'Free Schapelle' human rights protesters from across the world.

Music review analyst, Jan Fielding, of Margin House Records, commented: "Creatively, what Tara Hack and Cloud9 are doing is extremely exciting. They are breaking boundaries and innovating in an area of music which has been stagnant for years. It isn’t surprising that they are catching worldwide attention"

Mainstream Censorship
That worldwide attention, however, seems to exclude Australia.

Rachel James, of 'Artists for Schapelle' told us: "It is true that the song and the video is being hidden in Australia. Here we have an incredibly talented artist, a truly beautiful song, an historical landmark video presenting a unique global protest, about an Australian, yet the Australian mainstream media ignore it, pretending that it doesn't exist and printing trivia instead."

She continued: "Some time ago a film was produced which analyzed the media agenda and operation behind this type of censorship: 'Burying the Truth, Burying Schapelle Corby'. The mainstream's reaction therefore comes as no surprise. Having said that, ethical journalism does seem to be alive and kicking by virtue of some of the alternative media, who have reported fairly and accurately throughout."

Tara herself is unperturbed. When asked recently why a New Yorker should care about an Australian, she responded "I am a human before I am an American".

The 'Burying The Truth, Burying Schapelle Corby' video can be viewed o­n the following webpage:
http://www.schapelle.net/media.html

For me, a life without murder is like a life without food for you. I felt like the father of all these people, since it was I who opened the door for them to another world. 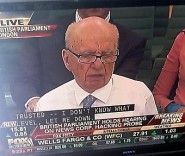