Man, I can't stand this shit. The squares are at it again.

They hate us freedom-lovers.

That 70 year old PM Howard should give up his tax-payer funded wine cellar and get some good old Nimbin green.

Then we'd have some "new" policy directions from his moribund government of wowsers.
Even Hymie the robot Premier of Victoria is getting in on the act: "Marijuana is much stronger than it used to be," he says.

Of course the Marijuana of today is stronger; we've been improving it man. Contrary to public opinion, us dope smokers don't just sit around and do nothing all day; we think, we extrapolate in our minds, we create with our enhanced imagination.

And then we act on it.

We are always looking for a way to make better weed; like a winemaker wants to improve his grapes.

As for that claptrap about dope effecting mental health...

None of my friends is a lunatic. And they have been smoking with me since year dot.

What about all the damage by this legal "recreational" drug???

Can't they just leave us alone? I just wanna smoke and poke, that’s it, nothing more.

Look out the squares are taking over... 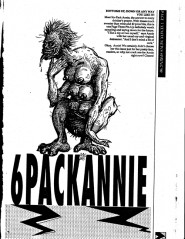 THE NEXT BRIDGES TO DESTROY

UFO skepticism over except for extreme dullards

CUNT COSTELLO BACK ON THE GOVERNMENT TEAT