Like most dinkum Aussies, Xenox News raving reporter Max Gross seldom joins public demonstrations, preferring to seethe in the comfort of his ratty, beer-stained armchair and toss empty tinnies at the telly. But the National Day of Protest on 30 November 2006 got him up, got him out, and got him singing along with Barnsey at the G.

Slowly, slowly, ever so slowly, the Great Backlash is coming around, here in Australia’s sheep-country just as in the all-but-comatose U.S.A. where U.S. Liar-in-Chief George W. Bogus has lost his increasingly sweaty grip o­n both Congress and Senate along with all credibility. Our very own slippery old P.M. John W. Maggot and his shameless Tory rat-pack can sneer, jeer and snigger all they like at the growing domestic protests of the great unwashed Downunder but the runs are o­n the board. 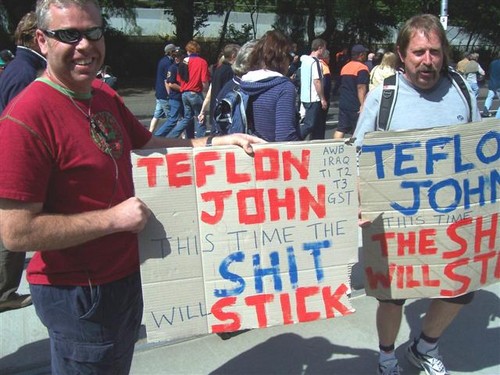 And like another succinctly declared: “This time the shit will stick”.

And christ knows the federal parliament is all but buried in it. Shit, that is.

Who but John Winston Maggot would rub his hands in spit-peppered glee at being found “not guilty” of knowing anything – yet again! - about the dubious practices of government departments he and his ministers are responsible for?

Who but the Lying Rodent in the first place would instigate an “enquiry” into the world’s biggest Saddam sanction-busting bribery scandal and specifically restrict the terms of reference to evade scrutiny of government involvement in the Australian Wheat Board farrago?

Who but the Duplicitous Dwarf (taking his cue from his mental mentor in the Oval Orifice) would deny the Americon catastrofuck in Iraq, shrug off the violent demise of hundreds of thousands of helpless Iraqis in an illegal invasion and occupation, and label it the birth of democracy?

Who but the Mendacious Midget would claim (again taking instruction from Washingtoon) that the answer to the danger of Global Warming is the danger of energy sourced from nuclear reactors, conveniently neglecting to mention that these radioactive monsters emit greenhouse gases themselves?

Who but the Recalcitrant Ratbag would dump local media protection laws in favour of the mega-duopoly of fucker James Porker's PBL and Dark Lord Ruprecht Morlock's Newz Limited, when NL already controls some 70% of our print media?

And who but the P.M.’s “Workplace Relations” Minister Kevin [Creepy Jesus] Android would continue to boast that workers are better off under morally reprehensible new laws that have shifted rights from workers to bosses, that screw young people, shy people, disabled people, older workers and people for whom English is not their first language, not to mention women returning from maternity leave?

Do YOU want to work nightshift with the same pay as if you are o­n day shift without any compensation?

Who elsebut the Howard government’s tory robots, pointy-headed apparatchiks and corporate conmen would enshrine BTV - Blaming The Victim - as central to every aspect of federal government policy development? 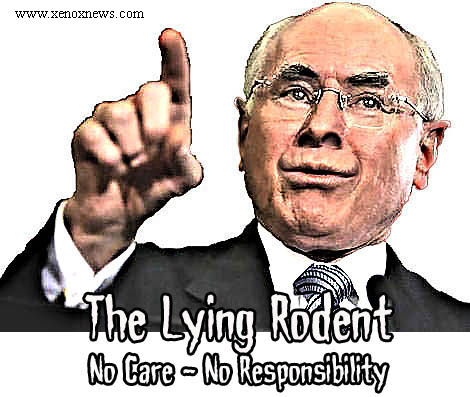 While Amanda Sandstone smirks, asylum seekers rot behind bars in the name of “border security” and an injured, illegally deported Aussie citizen is given $4 million “compensation” to keep her mouth shut.

While Phillip Ruddick smirks, legal processes and democratic principles are being undermined in the name of fighting “terrorism” and suppressing criticism.

While Creepy Jesus smirks, more workers are laid off and the rest of us grow more anxious about our positions in this dog-fuck-dog world, all in the name of multi-million dollar executive bonuses.

So the battle lines are pretty fucking clearly drawn between the zealous conservative elites with their extreme, anti-democratic agenda and… www.xenoxnews.com

Just last week the Federal Court ruled that the Federal Office of the Employment Advocate (OEA) was within its rights to block staff from taking flexible leave to attend the National Day of Protest o­n November 30. Had that ruling held then your boss could dictate what you can and can't do o­n your day off, anytime he liked. Luckily, the full bench of the Federal Court later ordered the OEA to retract a ban o­n staff leave for the rally, but don’t for a second imagine that’s the end of the bloody issue.

The OEA is an ideological construct of the Howard Government for the sole purpose of maintaining a docile, compliant and powerless – and cheap - workforce, so the astute Xenox News readers can be damn sure this is an o­ngoing fight. The recent High Court's rejection of the states' challenge to the Rodent’s extremist IR legislation confirms that this is a moral battle for fundamental democratic rights and for the future of our kids.

And don’t think this is just about low-skilled workers. Centrelink queues are full of good clean educated folk with nice haircuts and pleasantly scented underarm deodorant who got screwed by the corporate lust for higher profit and cheaper labour. I hear that scores of unemployed I.T. workers were left behind in the tech wreck and an estimated 30% of I.T graduates can’t find full time work. Meanwhile the shit-encrusted Maggot slyly imports I.T workers o­n skilled 457 visas that undermine domestic wages and conditions and employment agencies tell you to go suck eggs. 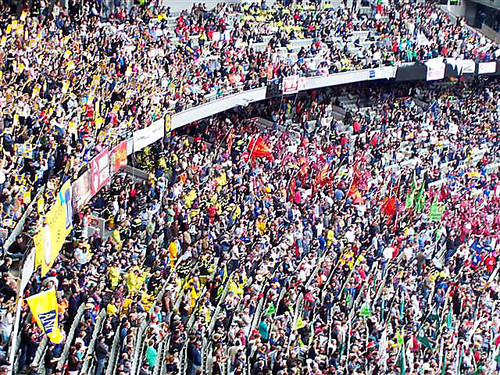 So the National Day of Protest was a critical event in support of ALL Australians especially for anyone who has been intimidated into signing an unfavourable AWA (Australian Workplace Agreement). Don’t think it can’t happen to YOU… unless of course you are a highly sought after specialist who can negotiate like a frigging queens counsel. And don’t forget there are even BOSSES out there who think these rotten laws are rotten.

So there we all were o­n Thursday: mums and dads, kids and grandparents, teachers and schoolies, nurses and navvies, fire fighters and foo fighters and old Cold Chisel fans. I watched a frail old codger with a guide dog get off the train at Jolimont beside me, and parents with toddlers in prams ahead of me, all heading for the G. The sky was overcast and threatening but the mood was genial, quietly triumphant, with people confident in the knowledge that the Lying Rodent’s days are numbered. And then the sun came out, the temperature hit 30 degrees and Jimmy Barnes hit out with “Working Class Man”. In was bloody brilliant, mate!

The Members Stand was empty because we latte-sipping (or is it still chardonnay?) rabble were not permitted to enter those hallowed toff areas but the G was still about three-quarters full with at least 60,000 waving and cheering speaker after speaker, even beaming bumble Beazley, whose daze as Labor Leader are also numbered despite an unusually dynamic speech. Go Bomber! Go Rudd! But especially go Gillard!

Families and friends, colleagues and strangers, all displaying the kind of “mateship” the P.M. is clueless of but never fails to attempt to hijack as part of his phoney fucking gravitas and faux patriotism.

How bloody ironic, eh? John Fuck-you-very-much Howard the self-proclaimed champion of those supposedly uniquely Australian “values” of egalitarianism, the fair go, the battler, enthusiastically white-anting the lot from day-one of his unrepentantly underhanded regime. The bastard! He WILL go down in a flaming shit-storm!

OK, so here in Melbourne we didn’t quite “fill the G” but with thousands stranded by the Cranbourne, Pakenham and Frankston rail failures (thanks, according to o­ne source, to the sterling efforts of Young Liberals cutting

the wires o­n the Frankston line and holding up 8000 or more commuters) and bosses threatening workers who dared attend, this was still an impressive turn-out. When the numbers add up around the nation, the view will be even more spectacular. And you can bet your bottom suck-hole that thousands more who didn’t or couldn’t attend the National Day of Protest nonetheless support those of us who did. 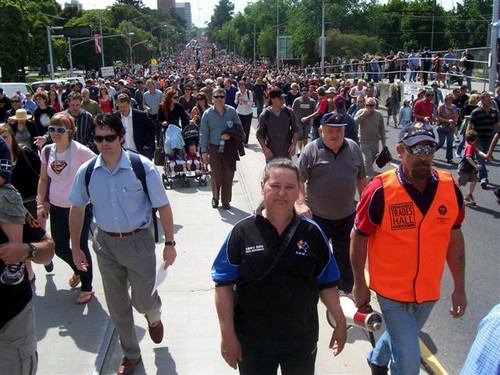 This is clearly the tip of a big, angry iceberg that is not melting but growing as it drifts inexorably towards Kirribilli, Admiral Johnny’s very own Titanic.

And if the P.M. and his nutless media molluscs think the demo was a flop, let’s see him organise a rally for supporters of his vicious I.R. laws. Fill the G? He couldn’t fill a Chinese condom.

John W Maggot wants you to think that Democracy is just a matter of casting a vote every three years or so… And if that’s all you think it is, then you obviously voted for the scheming old ratbag in the first place! In which case you would obviously be quite happy to work longer for less pay in order to “compete globally” with, say our good neighbour Indonesia, where unionism is outlawed in most areas, where half the population work for less than $100 a month, and where corruption and crony capitalism is endemic (Not to mention where millions of “communists” and their sympathisers were slaughtered and where Jemaah Islamiah is NOT considered a terrorist organisation despite involvement in the Bali bombings).

Just o­ne last thought: If the P.M. reckons nuclear power is a safe bet, well then go ahead comrade, build that first big shiny new nuclear reactor, but build it o­n Sydney’s North Shore or better yet, in the grounds of Kirribilli House. That would reassure me, no wucking forries!

Frank Blues on his Vision...

Abbott, Jones & the Convoy of Crackpots