THEY TORE UP THE RULE OF LAW, SPAT ON THE UMPIRE, NOW THEY WHINE WHEN OTHERS DON'T PLAY FAIR!

Raving reporter Max Gross doesn't know whether to laugh, cry or puke. He settled for the latter. Pass him a bottle and a bucket, readers, Max is taking a dump and squeezing out a Johnny!

Pentagon officials are chewing the furniture because of what they call "deadly deceptions" by Iraqi troops pretending to surrender to United Snakes forces and then firing on them.

Jesus, Mary and Joseph! the Yanks are whinging about "serious violations of the LAWS of war." 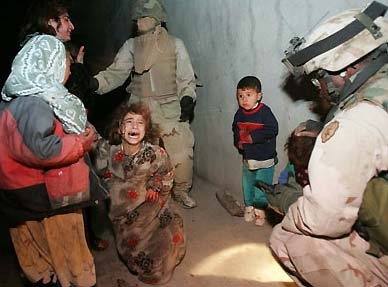 They're even threatening to prosecute Iraqi "war crimes"... THIS from the rabid mob in Washingtoon who are opposed to the International Criminal Court. Where's that bucket?!

And then there he was again, that nasty old creep Rumsfiddle - the special envoy Ronald Raygun sent to make kissy-kissy with Saddass Hussein after the Halabjah massacre - there he was, accusing Iraqi authorities of flouting the Geneva Convention on the treatment of prisoners of war.

Excuse me: did someone mention "rules"? Did someone choke on a pretzel and say those dirty words: Geneva Convention?

Well shit-a-brick! there can't be many non-vegetable, non-mineral life-forms on this planet that didn't see the problem with old Rummy's complaint.

Just for starters, wasn't it the US that spat in our faces, spurned the United Nations and invaded Iraq for no more reason than Presidense Bush had "lost patience" with the UN weapons inspections process overseeing the disarmament of Saddass?

Wasn't it the US that rounded up the losers in its attack on the Taliban regime in Afghanistan and keeps them locked-up in its military Twilight Zone in Guantanamo Bay - including two Aussies - without charge, without trial, and without legal representation, with no end of it in sight? 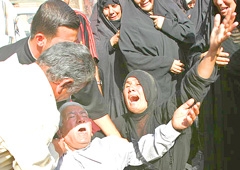 Wasn't it the US that paraded those same prisoners like chained, blindfolded cattle for all the world to see?

Wasn't it the US that just this very week broadcast vision of Iraqis surrendering, being man-handled and herded into trucks?

And how about that classic nighttime footage of a caring and sharing loudmouth Yank reporter zeroing in with floodlights and camera on Iraqi prisoners huddled in blankets trying to sleep? 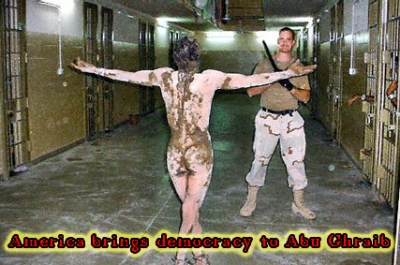 Why are the Geneva Conventions all of a sudden so relevant, when they have been sneered at by the US as an idealistic nicety when human rights organisations invoked them to protest Israeli attacks on Palestinian civilians?

Please, Rummy, we know you think we're all as dim as your flakey Commander-in-Shit, George Enron Bush, but give us a bloody break, will you!

"The real difficulty is that the Arab world sees a double standard. They dont see us being in the same way engaged and pressurizing Israel to take forward the peace process with the Palestinian people."

So said former British cabinet minister Robin Cook, who recently resigned as House of Commons leader in protest against Brit PM Tony Poodle and his involvement in the US invasion of Iraq.

He voiced what we alw 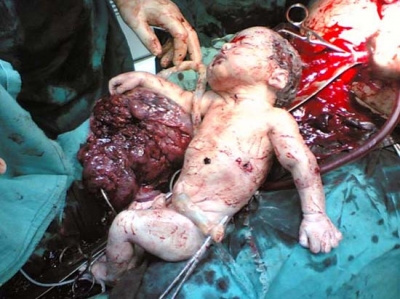 ays knew and the reason why the United Nations refused to authorise the crazy ratfuck US policy of pre-emptive military strikes and the example of dangerous double standards that the US has set.

Even Former UN arms inspector and prime-time gadabout Dicky Butler has said that Washingtoon was promoting "shocking double standards" in taking unilateral military action to rid Iraq of its weapons of mass destruction.

Like so many others, Butler warned - in January this year - that a U.S. attack, without United Nations backing, and without any effort to curb weapons of mass destruction globally, would contravene international law, increasing the divide between so-called Arabs and the so-called West.

We are seeing that divide growing as Turkey threatens to invade northern Iraq to prevent the Kurds from establishing post-Saddass autonomy, as Iran's army of Shi'ite Iraqi refugees prepares to fight any US-imposed administration, and in the unprecedented public demonstrations in countries across the Middle East - and around the world - against the US invasion, against this Coalition of the Killing. 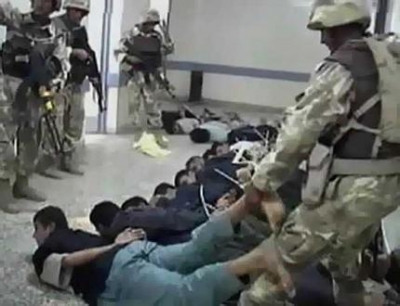 Well, hoping that Rummy - and I guess maybe the whole pack of incestuous, lip-smacking, arse-sniffing dogs of war in Washingtoon - has suddenly seen the light, let me get this out before they pop a fuse and the bulb bursts...

According to Articles 41 and 42 of the UN Charter, no member state has the right to enforce any resolution militarily unless the Security Council determines that there has been a material breach of the resolution, decides that all nonmilitary means of enforcement have been exhausted and specifically authorizes the use of military force.

The Council did so in November 1990 with Resolution 678 when Iraq occupied Kuwait and violated a series of resolutions passed that August demanding Iraq's withdrawal.

When Iraq complied by withdrawing from Kuwait in March 1991, this resolution became moot ( I LOVE that word!)

By comparison, for the past 30 years Israel has defied UN resolutions ordering it from the West Bank and Gaza. So why was Iraq's non-compliance punished by repeated bombings and a rigorously enforced trade embargo responsible for the deaths of millions of Iraqi kids? 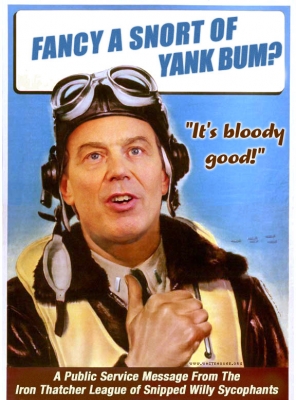 Obviously not for "humanitarian" reasons, Georgie, Tony and Johnny!

I've read that of the almost 1,500 resolutions passed by the Security Council - the fifteen-member enforcement arm of the UN in which the United Snakes of America and the four other permanent members hold veto power - about ninety resolutions are currently violated by countries other than Iraq.

The vast majority of these violations are by governments closely allied to the United Snakes.

What say you, Rummy, you treacherous old bastard?

The belligerent US insistence on invading Iraq unilaterally and fuck-you-world has undermined the principle of collective security. By sabotaging the authority of the UN, the bullshit Bush regime has put us all at greater risk of terrorist actions.

The potential for international anarchy is right there for anyone with half a brain to see... anyone accept the potted Shrub in the Oval Orifice.

Unless the US adopts a uniform policy against terrorism and human rights violations for all the countries in the world, it will be seen for what it clearly is today: 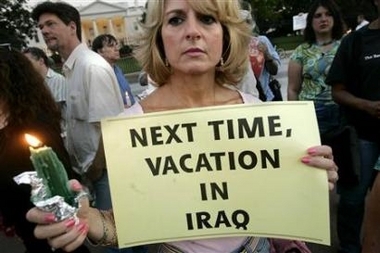 a rogue state endangering the peace and stability of the entire planet.

Just a final word, from the very brave (or very mad) Paul McGeough, one of the few foreign correspondents still in poor bloody Baghdad.

He points out that the US has never captured a heavily defended city as big as Baghdad, with its population of 4.5 million.

And past US successes in smaller cities like Hue during the Vietnam War cost more than 1000 Americans dead or wounded, and 9000 Vietnamese casualties.

Is this the kind of "shock and awe" you numbnut, burger-chomping, coke-slurping, arm-chair patriots really want to see on CNN?

Come on Yanks, come back to earth and join the human race.

You're either with us or against us!

This was Max Gross for Xenoxnews.com, grabbing another fistul of ice, turning up the volume of Mahler's 9th, and wondering when the Brits will wise up and get out of the Yanks' line of fire!