Johnny, your slip is showing!

Friday, 06 February 2004 By Max Gross
Lies. All lies. All but blindingly exposed to even the most gullible, flag-waving, heel-clicking, arse-sniffing, kow-towing idiots and 'patriots'.

It's just a matter of time before the cold, calculating old brain of slippery John Howard is dragged into the media spotlight for what he is and what his duplicitous and destructive tenure as Australia's prime minister really means.

And no amount of embarrassingly blatant posing with sports stars and men in uniform will save his sorry white arse.

History will not be kind.

That was Australia's very own Lord of the Lies, Prime Minister John W Howard, talking in Perth just yesterday, still living in his daydream of being invited to the White House by the 'most dangerous and incompetent president' (as Mark Latham said before running for Johnny's job) to ever fart in the Oval Orifice.

'Non-compliance' with UN resolutions, Johnny? May we expect a Coalition of the fucking Willing to strike at Tel Aviv with Shock and Awe to force Ariel Sharon to comply with countless resolutions demanded of that particular rogue state?

To paraphrase Willard in Apocalypse Now: the bullshit emanating out of Washingtoon re Saddam's Weapons of Mass Destruction piled up so fast you needed wings to stay above it

Continuing to bullshit re 'intelligence' used to justify killing Iraqis for their own good, that fork-tongued old fuck Johnny also brazenly stated "There are differences of view and there are different conclusions about the immediacy and the quantity but the jury is still out".

Well, actually no, l'i'l Johnny, the jury of global public opinion and international consensus was always IN, well before Bush Jr invaded Iraq and killed some 10,000 blameless Iraqis and 500 misled and misguided US troops.

Unprecedented millions took to the streets around the world to protest the Bush regime's avowed intention to attack Iraq. Other nations were appalled by the very concept of US 'preemption', which by definition implies a monstrous kind of 21st century feudalism.

It was a generally held view that the murderous Saddam Hussein and his thugs were NOT a world threat and that UN resolutions did NOT authorize an attack o­n Iraq by the USA or any of its pathetic client states.

In fact, 'the jury' by now has heard the same fucking plethora of duplicity, threat and blind arrogance, since well before the US attack, and the verdict remains the same:

That vile, ignorant ratfuck, the Presidunce of the USA and his very wealthy clique of oily advisors forced a war o­n Iraq, willfully knowing that there was no WMD threat posed by Saddam. The o­nly threat that cruel bastard posed was to his own oppressed and long-suffering people, and THAT issue o­nly ever became a cause for war AFTER Bush and co's WMD scare tactics failed to frighten the fucking neighbours.

Bush and co knew what they wanted in Iraq, well before the September 11 atrocities, and they used that tragic event to fake their indignant, self-righteous and sickeningly hypocritical tub-thumping about Saddam Hussein's 'evil'.

Of course they knew all about Saddam. After all, the USA nurtured him in his vicious bloody infancy.

The Bush regime selected what it wanted from 'intelligence' sources, ignored the caveats, cautions and disclaimers that we all knew were there, and inflated questions re Saddam's 'non-compliance' into a fictitious global threat.

And they KNEW it to be a fiction, even as they scorned the UN inspection process, bullied opposing nations, and pissed o­n the heads of their constituents and called it rain.

There were no stockpiles of chemical and biological weapons in Iraq.

The Bush regime cherry-picked, as critics were saying all along. But that's ain't cherry juice, pardner, that's the blood of innocents.

The warmongers plan now to twist the WMD storyline yet again and blame intelligence agencies for THEIR failure, when it's obvious to everyone that invading Iraq was a policy decision made by the corrupt Bush administration, and backed by limp Brit and Aussie governments hoping to get into George Dubya's good books.

Gosh durn it, I guess they plumb forgot the Texas Deranger don't read nuthin but comics.

And as the body bags and cripples continue to be smuggled back into the USA, out of sight and away from public scrutiny, even the blinkered Homer Simpsons and careworn Sadsacks of that tainted nation of dashed hope may soon awake from their coma to recognize that abused Iraq has patriots too.

Let's hope they awake BEFORE the presidential election.

Let's hope they spurn the rule of the wild, wild west and return to the rule of international law.

Let's hope they shut down America's Guantanamo Bay concentration camp and the 725 or so US military bases in existence outside the United States, pronto!

Let's hope Saddam Hussein is brought to trial before the ICC, along with the many members of successive US administrations who supported his brutal dictatorhip, including the current incumbents in Washingtoon.

This was Max Gross for Xenox News, o­n-line, 'on-script', and o­n a fucking bender.

Hand me that ice pick, babe, I've a hankering for red meat.

I love criticism just so long as it's unqualified praise. 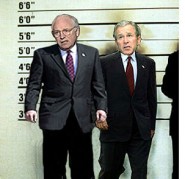