Well, I suppose it had to happen. The US was bound to believe it's own hype eventually. The powers that be honestly do believe that they are invincible. Or do they?
I can't help being cynical about the US's motives here. They know damn well that more missiles, tanks, and guns aren't going to stop another terrorist attack. They know that, to the contrary, any attack on an Arab nation is likely to provoke more attacks. They know that the only defence against such terrorist attacks is an incredibly effective espionage network. Yet, knowing all this, what is Bush's proposal: First Strike.

The cost for a single B2 stealth bomber is in the range of billions of dollars (US). For this sort of money, the US should be able to buy every secret on the planet for goodness' sake! No organisation is impregnable. There are individuals in every organisation that have secrets to hide, which makes them blackmail-able, even in fanatical groups like Al-Qaida.

So why isn't the US focussing on this approach? Could it possibly be that they are simply using the War on Terror as an excuse to inflict their own value systems on the entire world?

Compare the results. An open attack on, let's say Iraq as an example, will almost certainly unite the Arab world against the US. At the very least it will give radical mullahs across the middle-east new material for their propaganda war against the US, which will in turn provide more fertile breeding grounds for terrorists. The attack would kill hundreds if not thousands of innocent Iraqi civilians, and would cost at least into the tens of billions of dollars.

On the plus side, it will provide Bush with a nice little distraction from political disasters on the home front, it will provide America with ready access to cheap oil, and results (such as they are) will be achieved nearly instantaneously.

On the other hand, an espionage approach. After infiltrating the various terrorist organisations (a process that may take several years), targetted strikes against key personnel could be ordered. No innocent lives at all would be lost, the middle-east would not go up in flames, and the cost of the operation would be next to nothing compared to the prospect of going to war. Best of all, the actual security of the US would be improved! However, an espionage approach by it's very nature can't be splashed across the front page of newspapers. It won't provide access to cheap oil, and it will take time to implement.

It should be noted at this point that the pros of a military attack have absolutely nothing to do with an effective war against terror. They are instead pros of domestic political gain, and, in the case of oil supplies, economic drivers. This point is what is driving my own personal cynicism towards the US's foreign policy at the moment.

For me the big question now is what is Europe going to do? Are they once again going to stand by and let the US turn the world into an ideological battleground, or will they finally call the US's bluff. Make no mistake, the threat of opposition by the combined forces of the EU and Russia are more than enough to stop the US military machine in its tracks.

Sadly, it is unlikely that Europe will do anything, despite it's anti-invasion rhetoric. They will diplomatically deplore the US's unilateral use of pre-emptive strike, but they will not go to war to preserve the integrity of the United Nations.

As George Bush senior said during the first war against Iraq, it is a new world order. It's just a pity that the rest of us didn't realise that he meant it's a new US world order.

Disclosure: Allison is an engineer and former officer in the ADF!

The obsession with suicide is characteristic of the man who can neither live nor die, and whose attention never swerves from this double impossibility. 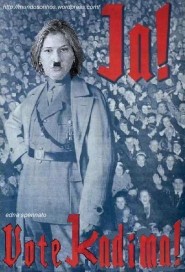