The Geese & the Gander

Friday, 25 October 2002 By Correspondent
WEAPONS OF MASS DESTRUCTION? THE USA IS AS MUCH A THREAT TO WORLD PEACE AS NORTH KOREA, IRAQ, IRAN OR ANYPLACE ELSE!
The Yanks have dumped the test ban treaty, despite it being integral to the non-proliferation of "weapons of mass destruction"..

The Yanks refuse to accept legally binding limits on the size of their vast stock of nukes.

The Yanks say they're willing to make a first-strike using nuclear weapons (and in fact are the only ones ever to have dropped- not one, but two! - nuclear bombs - on opponents)! While pontificating that they are acting on behalf of the world community in dealing with weapons of mass destruction, the Yanks maintain a slack record of cooperation with the United Nations, and apparently revel in acts of self-serving unilateralism.

Yank obstruction of a universal system of inspections for the biological and chemical weapons conventions, its sabotage of the International Criminal Court, and its rubbery definition of self-defence, are all just more of the same.

Saddam is a vicious, murderous creep, but that does not make George Bush Jr an saintly, irreproachable "good guy".

We want international law that ALL nations adhere to, not just the political runts and economic pipsqueaks.

The majority of the stupid is invincible and guaranteed for all time. The terror of their tyranny, however, is alleviated by their lack of consistency. 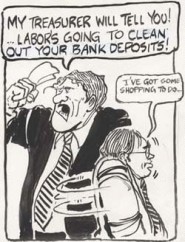