QUICK! GET A COPY OF “DUCK SOUP” AND WATCH IT NOW!
So, Australia's Mendacious Midget Prime Minister John “Mini Me” Howard is parroting the White House line that we should all hop on Presidunce George Dumbass Bush’s whacky war bandwagon because that vicious old creep Saddass Hussein is supposedly defying U.N. resolutions.

Well, he ain’t defying them any more, is he! The U.N. inspectors are now welcome to can come on down and start sniffing through the sand again.

But that’s still not good enough for the Pretzel Prez and his oily minders, because THEY NEED A WAR TO SAVE THEIR ARSES at the next election. DON’T MENTION THE STUFFED U.S. ECONOMY!

But hey, using the same argument Bush, Blair and Mini Me have for a war on Iraq, we can invade Israel! And here’s why:

The country that is the all-time world-class world champion at defying U.N. resolutions is Dumbass's favourite country, Israel.

There is no way you can logically argue that failure to enforce about 70 resolutions against Israel does not jeopardize the United Nations, but failure to enforce 16 resolutions directed at Iraq would and is a just cause for war. Only an imbecile would do so. And he did. And all his idiot mates have come out of the woodwork to parrot the same easily exposed lie.

The reason the United Nations has never tried enforcing its resolutions directed at Israel is that the United States – that glittering example of global mutual respect and international cooperation - won’t let it!

Back in your box, Bush! Truth, Justice and Democracy are NOT or your side!

Dostoevsky's characters did not evolve 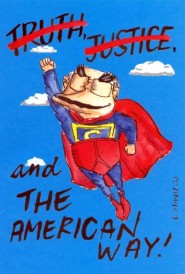