The disgraceful Iraq farce continues as the three-headed hydra of Bush, Blair and that Funny Little Guy Downunder, thrash about trying to dodge the increasing hail of facts that are spoiling their desert adventure.

Here are a couple of quotes that reflect the true nature of the U.S. occupation of that sad and sorry land.
According to an ABC News reporter (the U.S. ABC, that is), an angry American Sergeant in Iraq told him "I've got my own 'Most Wanted List,' " referring to the deck of cards the U.S. government published, featuring Saddam Hussein, his sons, and other wanted members of the former Iraqi regime.

"The aces in my deck are Paul Bremer, Donald Rumsfeld, George Bush, and Paul Wolfowitz."

And then there's U.S. General Ricardo Sanchez in Baghdad who, unlike his masters in Washington, is worried about Iraqi reaction to the occupation.

"When you take a father in front of his family and put a bag over his head, " says Sanchez, "and put him on the ground you have had a significant adverse effect on his dignity and respect in the eyes of his family."

Hmm, with that kind of insight, no wonder U.S. legitimacy is sinking into the desert sands. 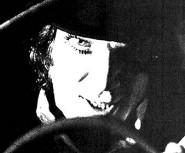