The reach of the (U.S.) doctrine, and its dangers, were well described in an article in Foreign Affairs by Professor G. John Ikenberry of Georgetown University.

The grand strategy, he wrote, "is a general depreciation of international rules, treaties, and security partnerships." Yet it was those very relationships that have so benefited this country since World War II.

"The secret of the United States' long brilliant run as the world's leading state," Professor Ikenberry wrote, was its ability and willingness to exercise power within alliance and multinational frameworks, which made its power and agenda more acceptable to allies and other key states around the world.

He warned that unchecked US power, shorn of legitimacy and disentangled from the postwar norms and institutions of the international order, will usher in a more hostile international system, making it far harder to achieve American interests. 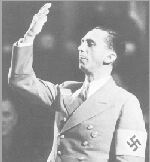 Will not be long now until the big fuckup.

THE SHITHOUSE THAT RETARDED JOHN BUILT

The economic winter: How false social theories rule the world