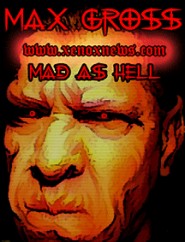 The release of the Tasmanian miners Todd Russell and Brant Webb after weeks of being trapped underground has been greeted with joy all round Australia. And now it seems it has been accompanied by some mysterious events. Reports are flooding in to XenoxNews regarding the miraculous speech of the previously mute Boonie VB dolls.

For months the David Boon figurine has remained silent following the end of the domestic cricket season. But it now seems that they have come to life once again, and these tiny Tasmanian Icons are now giving voice to the emotions of the nation.

And what is Boonie demanding? VBs all round!

XenoxNews implores it's readers to follow St Boons advice and have a beer in honor of the brave workers who freed Russell and Webb, in honor of the two miners themselves, and in rememberence of their fallen comrade Larry Knight.

Spartans! Ready your breakfast and eat hearty. For tonight we dine in hell.

INSANE ISRAEL: SLAUGHTER OF THE INNOCENTS