Phil Marlowe gets lost in a parallel unworld.
Episode 5


I took the brown furry blasphemy and sat down with
it again. I wiped some blood off the palms of my
hands and turned it around, though it was only
with fear and loathing that I touched it.

It was addressed to The Cabot Museum of
Archaeology, which specialises in such remnants of
ancient and unknown civilizations. The address was
in a cylinder of an unknown metal containing a
roll of thin, bluish-white membrane of equally
unknown nature, inscribed with peculiar characters
in a greyish, indeterminable pigment.

I looked at the slips of membrane. They were
promissory notes filled out in ink, for the sum of
One Hundred Thousand Dollars ($100,000.00) without
interest. The written part was probably leaving
its fate to the discretion of his executors. That
shocking thing from the primal Cyclopean crypt on
an ephemeral sea-spawned island was always its
chief attraction and most impenetrable mystery. I
mixed myself another insoluble enigma and put the
exhibit aside.

"Your conclusions?" the General asked.

I was in fact, satisfied to let my notions remain
as half-spied and forbidden visions to be lightly
played with. Hysteria usually comes only when duty
flings a person into a hell of revelation too
sudden and insidious to escape.

"I haven't any yet. I was permitted to learn
singularly little about these gloomy, secretive
rites. Who is this typical example of Egyptian
embalming?"

"I haven't the faintest idea."

"What does your daughter say?"

"I haven't asked her. I don't intend to. If I did,
she would in all probability be unravelled as
well."

I said: "I met her in the hall. She mocked me with
inhuman squeals and devilish gestures. Then she
tried to push me down the stairs."

Nothing changed in his strange brown weedstalks
and dead fungi. His general dissolution rested
peacefully on three unexplained deaths, five
disappearances, and four cases of sudden insanity.
Dust was inches thick on floor and furniture, and
the place smelled like a mould-caked tomb. The
glassy-eyed, gangrenous corpse of the corpulent
old obscenity, animated by some infernal sorcery,
had thrilled at the imputations of evil in the
world. Daily life had for him come to be a
phantasmagoria of forbidden visions.

"Do I have to be polite?" I asked. "Or can I just be
in a state of absolute neglect?"

"I haven't noticed that you suffer from many
encrustations, Mr. Hyde."

"Do the two girls usually try this materialization
together?"

"I think not. I think they must of course be
phantoms of my disturbed imagination. Neither of
them has any more moral sense than other things
which no breathing creature has yet seen."

"They're well connected with a powerful chemical
battery, I suppose."

"They offer two equally tragic alternatives to the
man of feeling and action; despair, if he fail in
his quest, and terrors unutterable and
unimaginable if he succeed. I presume they both
had, and still have, all the usual vices. If I
sound a little sinister as a parent, Mr. Hyde,
it is because the doctor told me that I had
undoubtedly been hypnotized by a vindictive and
homicidal madman."

I became infected with the terror which seemed to
be stalking in all the shadows and nodded.

"Your conclusions?" he snapped suddenly.

"I wish I could believe that doctor and his
bizarre conjectures. If he had good scientific
grounds, he might have stumbled on strange and
significant information. It might help my
metaphysical researches. I wish I could dismiss
what I have now seen and heard."

"I do not recall distinctly when it began, but it
was months ago. It's a question of whole worlds of
matter, energy, and life forms which lie close at
hand yet can never be detected with the senses we
have. And it would take an awful lot of
daemoniacal hints of truth and an awful lot of
time to rob you of enough deformities of mind and
body so that you'd even notice it."

"Some exceedingly clever hybrid creature is
counting on that. It's the easiest way to fool
them. Who was this highly peculiar person you paid
the hundred thousand dollars to?"

"Some kind of singularly repellent person who
seemed to combine a degree of intelligence and
interest in old legends with its reserve of
unguessed horrors. I hardly recall. Norris would
know. My devoted fungus." 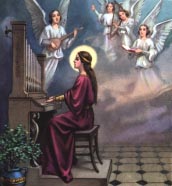 QUOTES FROM A GREAT MAN

NO QUEERS IS NO QUEERS