Now it appears the crazed Islamofascists were planning to bomb Australia's nuclear facilities.

Latte-sippers must recoil in horror as it appears their bedfellows, the Osama-loving terrorists, wanted to kill innocent Aussies.

When will they stop supporting terror and get behind the Leader of the Nation PM John Howard in his fight for freedom?

And will they stand with other stalwarts for freedom against the terrorist-supporting nation Iran in its quest to get nucelar weapons, or will they mouth their usual anti-American inanities?

Remember these maniacs don't care whether you support their religion or not; they just hate our way of life and want to destroy it and those that live it.

The breakthrough investigation against the terrorists in Australia provides all the proof you need.

Three German Shepherds were brought into one corner of the ring. In the other, Ali was fitted with a protective sleeve, and in the other hand a plastic bat. One dog after another, teeth bared and snarling, raced and leaped toward Ali, tearing his sleeve to shreds as he screamed incoherently: "Joe Frazuh! Joe Frazuh!" 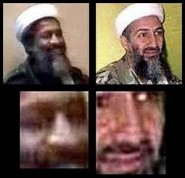 First There Is The Terror