The doomed Deadman-Sewage coalition having
received the same benediction as Steve Irwin
received from Judas Hogturd, meets a similar fate.

The NSW Liberal Party, staggering under the burden
of the infamous Hogturd curse, and running a campaign
based on yummy pissicle ice-blocks and the bold new
Easter Turds (in colourful foil wrapping) have
boldly strengthened the hold on power of the NSW
Labor Government.

Cheerful in defeat, Deadman said, "it wasn't easy, but
it was worth it", thereby affirming his admiration of
Kim Bigbagoshitzly's unbroken series of glorious defeats.

Judas Hogturd, wagging a bony and trembling geriatric
finger said, "let that be a warning to Kevin Rudd" as
he was being dragged away in a net, his bladder
releasing a couple of bottles of expensive taxpayer-funded
wine from the heavily fridge-magnet defended cellars of
rent-free Kirribilli House. 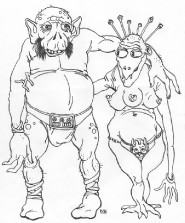 AUSTRALIA GOES TO THE POLLS 澳洲選舉難分勝負