I thought Aussies were thick...


...and I was right! Just been listening
to radio talk-back - "is he too old?"
Well, didn't I hear the most dangerous
old loonies ring-in to defend their
little tin god.

"He is a strong leader, and even though
I despise everything about him, and hate
all his policies, I think I should play
it safe and dive off a cliff with the
putrid little geriatric liar."

"He has been doing the job so long, he can
still do it!"

The stupid old cunts! I wonder what they
think the "job" is that their mummified
old sweetheart is doing, and who he is
doing it for.

I think it is time someone took a stick
to geriatric John-loving voters, and
thwacked them into the sea with as much
violence as it takes. Democracy my arse!
This is WAR!!!!!!!!

Oh, BTW, there were some smug young John
loving clots also - just crush THEIR heads
between a couple of bricks.

Some Velvet Morning when I'm straight... 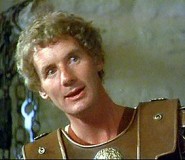 I Strut the Stage

Whaddaya think this is Bush Week or something?