EXCITING TIMES TO BE A CANNIBAL

"...economic rationalism, a sneer on its face, lays about itself, hacking Australia's fabric without anaesthetic and assuring the screaming patient that at the end of the slashing he'll be grateful" - Tom Kenneally, OUR REPUBLIC
"Style, like sheer silk, too often hides eczema" - Albert Camus, THE FALL
"I'm prepared to take advice on leisure from Prince Philip. He's a world expert on leisure. He's been practising for most of his adult life" - Neil Kinnock, in the Western Mail

So far that's about the extent of discernible difference between the brief, bumbling and ultimately shameful reign of the Mad Monk and the "exciting" man-of-reason Malcolm Turnbull. 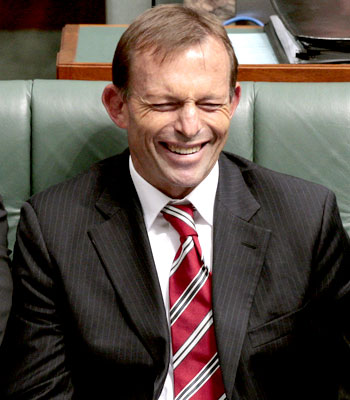 Knighthoods - the awarding of medieval titles - were initially scrapped way back in 1986 as a irrelevant anachronism unsuited to modern Australia but Tony Abbott, an ardent monarchist and reliable buffoon, reinstated that nonsense into the Australian Honours System, our official recognition of Aussies of exceptional worth and their contribution to national well-being.

Rose Batty's award for her heartbreaking work in raising public awareness and institutional responses to domestic violence was thus immediately rendered trite when, at the same time, Abbott announced the awarding of a knighthood to...

Gasps were heard even with LIEbral ranks at the embarrassing inappropriateness, ineptness and sheer effrontery of yet another of the then-PM's "captain's picks".

Abbott's withdrawal of government funding for alternate energy research involving wind turbine technology was done (according to the friar of fraud himself) because the mighty machines were "noisy" and "ugly".
So much for Australia's role in the global search for alternate sources of energy in the 21st century.

In fact, as we all knew, the blithering idiot was acting on behalf of the fossil fuel industry – those entrenched multinational giants of coal and petroleum – whose "donations" line the pockets of many a political party, both here in Australia as well as elsewhere. 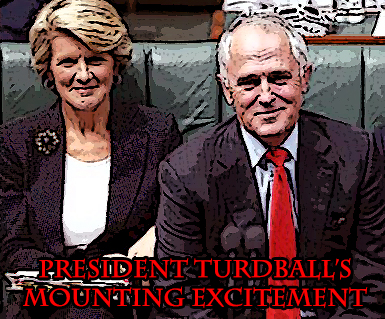 Who can forget Abbott's 2010 mind-boggling and completely unfounded claim to primary school students that it was considerably warmer "at the time of Julius Caesar and Jesus of Nazareth".

Reversing that "captain's call" was a no-brainer for Turnbull, professing as he does to be a man of the future - of "exciting times" - but he has left untouched Abbott's legislation aimed at shutting down the Clean Energy Finance Corporation which sponsors research into alternate sources of the power we all crave to drive our four-wheel drives, wide-screen TVs and Playstations.

And then there's the "historic" Paris Climate Change Conference accord on international responses to climate change.

Unlike his obdurate, dim-bulb predecessor, Malcolm Grech/Turnbull may not be of the opinion that the scientific data logging dangerous climate change is "absolute crap" but there is nothing remotely realistic about the Australian position as touted in Paris by Ms Jewelly Bubbles, our spiffingly attired Deputy PM moonlighting as Minister for Florid Affairs.

The pollution emission targets the Turnbull government is congratulating itself for is the same weak, rubbery and ultimately useless humbug cobbled together by the Abbott government.

Instead of demonstrating global leadership in combating the effects of climate change - which we could easily do with our abundant solar resources, wide open spaces and surf-pummelled coastline - we presented the world with a shabby facade behind which the fossil fuel status quo smirks.

Watching Environment Minister Dreg Hunt spinning the wool and prattling on about potential Australian greenhouse targets met here, there and everywhere was like watching a gormless Santa reciting a list of prezzies he knows shall never be delivered.

And debate about population growth and its environmental impact is non-existent, as if Australia in 2050 or 2100 will be much as the same as it is today.

In other words the Turnbull government's position on addressing climate change is, my friends, absolute crap.

Whether one thinks that observed global warming is "just" a natural phenomenon or not, scientific consensus is overwhelmingly clear: human activity IS exacerbating the pace of climate change.

Alternate, renewable energy options will offset our historic reliance on carbon producing fossil fuels but can only seriously proceed with full government support and participation.

As individuals we do what we can at but only government can make nationwide decisions that have immediate and lasting impact.

Tragically, the Turnbull government seems incapable or unwilling to make the paradigm shift on energy production and consumption that may act as a spur for others to emulate.

Far from being the astute financial managers they purport to be, the LIEbrals have offered a plethora of lame excuses for blowing out the government deficit by over $37 billion and sending Australia's economic growth plummeting.

Strangely, this does not constitute a "debt and deficit disaster" or "budget emergency" that this mob screeched and brayed about throughout the Rudd/Gillard years but merely a "transition" that requires "patience"!

As for Turdball's "innovation" package", announced with trumpets, streamers and the usual self-congratulations, all its does is restore a billion-odd dollars of some three billion that Abbott stripped from the sector. And on that note let us pause in rememberance for the passing of the previous Treasurer, Smokin' Joe Ham-hock, who failed to deliver his first and last two annual budgets and has been rewarded for his incompetence with a stint in that traditional sheltered workshop for dumped MPs, a diplomatic post overseas, in Joe's case the plum ambassadorship to the USA where he is sure to at best amuse the locals, at worst stuff-up international relations.

I mean... wow! What a breath of fresh air is Malcolm Grech!

These really ARE exciting times to be a free-market cannibal!

And let's make no mistake: Australia is ruled by a ruthless, neo-conservative political party of self-entitled opportunists and the power-hungry plutocracy behind it who rely on a pool of jobless workers and the fear of unemployment to erode hard-won workplace rights and conditions which are never safe from LIEbral predation.

It is in their DNA to assault critical social services rather than the monied interests that they shower with government largesse, dodge tax and scam the rest of us.

And nothing - absolutely nothing - is more important to these amoral bloodsuckers than making more and more money amd maintaining their lofty positions of power.

This was Max Gross for Xenox News, feeling excited, blighted and frighted as the great grindstone called Capital continues to crush the weak, the meek and the voiceless.

I went into the salon, I said "I want to look like Potsy in Happy Days"