Man 'o' Steel Australian PM John Howard has criticised Iraqi PM Maliki for not doing enough to stop the violence in Iraq. Both he and President Bush, he said, were advising Maliki to do more but for some reason he wasn’t.

Is Howard saying that the violence in Iraq is due to their 'elected' leader?


Well then it might be time to bring in an unelected leader. Howard has often served as the mouthpiece of the Bush administration. Maybe he is signaling it is time for the democracy experiment in Iraq to finish and bring in someone else. A stronger leader, more responsive to the needs of the occupying, sorry, liberating forces.

Hey Johnnie you slimeball 4-eyed cocksucker remember you started this war, so everything that has happened from it is inception is your responsibility.

Responsibility; a word that sums up 70 year old Howard’s Government.

It is his if it is in relation to something good, it is must be someone else’s if it is bad. 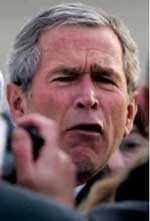 By the powers of darkness