After all, Aussies locked out of employment, pensioners, students (aka youth) and those struggling to get by on disability support pensions don’t earn enough money to warrant a tax cut. And by completely ignoring pleas to increase subsistence Newstart payments the LNP plans to make the jobless homeless too.

According to ABS stats released March 2018, there are currently 2,870,100 job seekers competing for 178,600 jobs – or, 16 job seekers for every position currently available. Spot the elephant?

The LNP continues its core agenda of crushing the life out of those who are most vulnerable, most defenseless, most in need of help.

Not only is there to be no increase to the poverty-level Newstart, another 1,200 staff will be sacked from the already overstretched Department of Human Services.

Lame-duck Prime Minister Malignant Turdbull naturally shrugged off the struggles of Untermenschen by rabbiting on about those precious darlings on higher incomes who pay more tax than those on lower incomes.

Turncoat failed to mention those higher income “earners” who – just as he does – hide their money away in overseas tax shelters like the Cayman Islands or who negatively gear their incomes down to $80k, nor did he say a word about some of the biggest corporations operating in Australia who pay NO tax at all.

What’s more, Mal and his LNP merchants of mendacity STILL plan to gift some $80 billions to those very same white colar criminals – including the Big Four banks exposed in the Banking Royal Commission for their systemic corruption and illegal practices.

Coincidentally, there is also a massive $26 million funding CUT and the sacking of 30 investigators from ASIC, the corporate regulator whose job it is to investigate corporate malfeasance. Neat, sweet, petit!

As Deputy Opposition Leader Tanya Plibersek tweeted: “The Liberals can’t find $14 a fortnight to give to pensioners to help them pay their energy bills, but they can find $17 billion to give to the big banks.”

I’m not even going to bother with that two-legged LNP tapeworm Julia Banks‘ haughty proclamation (repeated by that IPA imbecile Frydemburgers and shrieking nitwit Muckraker Cash) that SHE could verily easily live on “$40 a day”.

I guess the extraordinarily frugal Ms Banks knows what she’s talking about because she owns six investment properties! But, as other commentators have pointed out, $40 wouldn’t even pay for her lustrous hair dye. (And, for the record, Nostart payment is LESS than $40 a day).

Adding to the yawks, farts and chuckles, Italian citizen and Minister for Coal & Great Big Holes in the Ground Matt Caravan apparently swanned into the Kingston Hotel in Canberra recently and paid $36 for an eye-fillet steak. Well, la-de-dah! 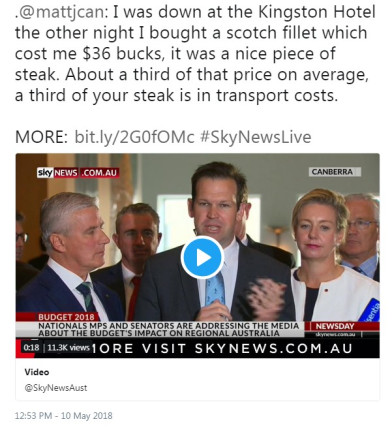 Chances are, folks, YOU paid for Matty’s steak!

Well, feck him! It is no surprise to realise that all the worst zombies of previous LNP budgets remain in this one – squeeze education, hospital services and social security.

Anti-science, fact-denying holier-than-thou troglodytes in blue ties.  If Australia is Titanic, the LNP are blowing holes in the hull.

So, despite staring into the abyss of their demise, no matter when the election is held, the LNP continue their Class War on the poor, the marginalised, the disenfranchised and every other victim of  self-serving LNP policies.

The national public broadcaster, the ABC, has predictably been struck a crippling blow with yet another funding cut. As the SMH reported: “More than $80 million will be cut from the ABC in coming years in the biggest hit to the national broadcaster since Tony Abbott swung the axe in 2014.

The IPA – the so-called Institute of Public Affairs which is really just the media arm of the LNP – now has almost everything it wants regarding the ABC:

And yes, it IS Class War and the LNP have engaged in it from their earliest manifestation as political parties fronting for the moneyed and the privileged.

As for the threat posed by rising carbon emissions, the LNP remain in denial.

There was no mention of any Budget measure to tackle the issue and, in fact, more conservation and science jobs have been abolished. And all this while Australia maintains the worst mammal extinction rate in the world with one out of three mammal extinctions in the last 400 years having occurred here, more than 1,700 species of animals and plants listed as being at risk of extinction, and the erasure of about 40% of Australia’s total forest cover in the last 200 years.

The LNP ship of fools is aground on a reef of its own dysfunctional incompetence and is sinking, taking the rest of us with it.

But wait, I hear you wail, surely the curtain has dropped and the phony North Shore wizard and his gibbering flying monkeys are as startlingly exposed as a baboons arse.

Well, yes and no, folks!

As the LNP’s inevitable demise at the next election approaches, prepare for a full-on, no-holds-barred shit-storm of LNP treachery, self-interest, malice and lies from the inbred born-to-rule masters of the Universe!

That Malcolm Blithering Turnbull is still PM and (*cough!*) “leader” of the LNP only goes to show how long you can flog a dead horse.

The increasingly desperate LNP will go utterly feral because they know they have nothing left to lose. Even those witless, seat-warming plonkers KNOW they are roadkill at the next election.

The new LNP slogan is Root, Rort & Run! ! That and Kill The Poor!

Shee-ite, people! Abbott was a bumbling, shambling disaster, tripping over furniture, smashing windows and shitting on the dining table. Even the LNP puppet masters soon realised that! But Turdbull is the Incredible SHIRKING Man. He WILL lead the party… to its inevitable, decisive rout. Throw that goat into the volcano!

Yes, between them, Abbott and Turnbull have made history. The years ahead will hang their political carcasses on the nation’s barn door for future generations – if any – to gawp at in disbelief.

But their devious predecessor, the Lying Rodent, is who created this horror-circus-train-wreck-implosion.

John HoWARd is the conniving ratbag who latched onto 9/11 like a life preserver, stole Appalling Hanson’s racist rhetoric and rode the wave of smear, fear and parochialism like a pro surfer! If not for Howard, we would not be in the political cesspit that we are now.

And who voted the malignant dwarf into office for a record term? Why, the usual handful of vacillating Aussie nitwits that swing every election. And then – finally – they rolled Howard too. Who the feck even knows why anymore?

Remember the Budget Emergency that the LNP used to howl about? The Debt and Deficit Disaster?? The $200 lamb roasts??? Since then those dickheads have more than doubled and tripled the debt and deficit that they claimed was an budget emergency under Labor and STILL they want to increase it by reducing taxes for big businesses that pay little or no tax at all! Aye feckin’ carumba, no wonder I drink!

That the LIEbrals are better economic managers is a hoary old myth that, like Morriscum’s zombie Budget measures, refuse to die:

Labor’s Rudd/Gillard government handed the LNP the best performing economy in the world but within a few years these inept, malicious, and corrupt LNP wankers plunged Australia’s economy from the global top six and into a moral abyss from which it is yet to emerge.

The rancid old furphy about the LNP has been exposed as utter bollocks time and time again but the bastards ARE experts at one thing: gaming the system and garnishing themselves and their cronies at the expense of the nation and most Aussies at every opportunity.

FFS, people, understand this: the Budget is essentially bullshit anyway.

For actual facts and figures, as opposed to Morriscum’s fantasy-never-never-ga-ga-land predictions, check this out [https://www.finance.gov.au/publications/commonwealth-consolidated-financial-statements/]:

But THIS is the nut you should take away from this and chew on:

20% profit-increase corporations contributed just 18% of tax revenue while individuals were raped at 51% in taxes… as well as another 16% in sales taxes to total 67%.

Repeat after me: 67% tax revenue from mug punters compared with a measly 18% from big business, including some of the largest, most profitable multinational corporations having a picnic in Australia even as we choke on our smashed avocado and chardonnay.

As for keeping informed. Forget the compromised, bastardised ABC. The LNP has turned it into their version of Pravda or TASS or Fux News or the inane 7 or the execrable 9 or the irrelevant 10, turning Aunty into a blathering blithering dementia patient. IPA Mission Accomplished.

Fortunately, the WWW is still – for the moment – an invaluable news source. Make use of it while it lasts.

Anyhoo, as the next federal election looms – possibly as early as August, say some curmudgeons! – in Australia the outcome always hinges on a relatively small group of swinging shit-for-brains with the memory span of goldfish. It was ever thus.

As for the 2018 Budget fallout, there is already SOME good news!

In order to prevent certain Senate defeat, the LIEbral government has been forced to discard its controversial changes to parent visa sponsorship rules. As SBS reported: “The backflip… will completely reverse the changes, just a month after they were introduced by Social Services Minister Dan Tehan.”

Did I descry Scotty Morbidscum’s saliva-covered smirk quiver in uncertainty and fear for his shiny but ever-so-delicate pre-election bauble? Bloody oath, mate!

And therein lies our hope: the Senate may still stimey the LNP’s worst fly-blown excesses.

As for Bill Shorten’s Budget Reply speech, it’s a no-brainer.

Labor has just pledged $17 billion for education that the LNP wants to give to the corrupt Big Four banks.

Bill Shorten IS our next PM.

Meanwhile, the entrenched LNP crooks, creeps, con artists and nut jobs will continue to bounce off the walls and there are still a few beers in the fridge. And life is… whatever it is, as always.

Nuclear war would mean abolition of most comforts, and disruption of normal routines, for children and adults alike. 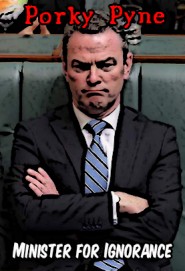