"The secret of success is sincerity. o­nce you can fake that you've got it made." - French dramatist and diplomat Jean Giraudoux. 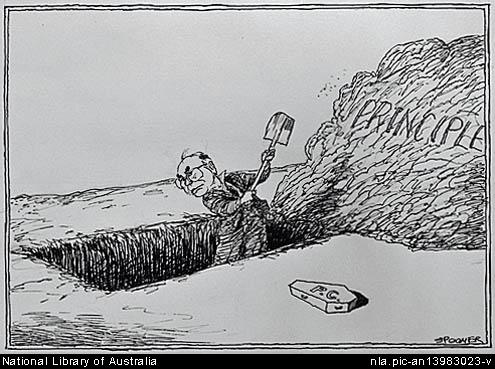 As Australia's phoney election follows o­n the heels of the phoney war-on-terror (say it like a mantra!), once again I hear the braying of donkeys praising the so-called “economic management” credentials of the insidious John Howard PM and his conga-line of suckholes.

Too bad Access Economics is forecasting that the PM’s massive overspend of $2 billion in pre-election bribe money will finally force up interest rates, plunge the treasury into deficit, and ham-string future government ability to finance policy. And then there’s the PM’s historically unprecedented splurge o­n government advertising. Responsible fiscal management? Not when your political life is at stake! Remember, Howard was politically dead for years before becoming Australia’s Prime Minister. Devoid of leadership, even his own party did not seriously think he had any credibility, but back then the misnamed "Liberals" had nothing to lose.

Now with the tenacity of a brain-sucking zombie rampaging through a cemetery, John Howard is clinging to his longed-for trophy in a death-grip. 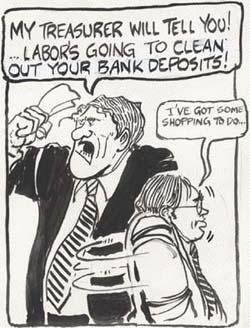 This IS the same slippery pointy-head that screwed up so famously as Treasurer during the Fraser years. Lazarus with a triple bi-pass, raised from the dead to trump his prime ministerial predecessor, the often misunderstood and often mistaken Labor leader Paul Keating.

But it was the Labor Party's Keating who saved Australia from the South East Asian economic meltdown, not John Howard who romped into office to claim that achievement after Keating did all the hard yards. Keating’s policies were in place when the Asian tiger choked o­n its own tail, NOT Howard’s.

As for Howard's unprecedented deluge of pre-election government ads, what are we punters supposed to make of the PM’s dubious Medicare “support” ads: we’re bombarded with them night and day as they attempt to numb us into a relaxed and comfortable coma. With glazed eyes and limp smiles, we’re supposed to think the Howard government is sharing and caring rather than mean and tricky? Hmm, definitely a waste of money there!

What did the 70s and 80s Howard have to say about Medicare? That is was a "miserable cruel fraud", a "scandal", a "total and complete failure", a "quagmire", a "total disaster", a "financial monster" and a "human nightmare". That he would "pull Medicare right apart" and "get rid of the bulk-billing system”.

Mission accomplished, John? Well, almost but not quite. We still have time to nip your little weed in the bud. Or, like your mentally ill mentor in the Oval Office, will you contemplate postponing the election because of some conveniently vague, undisclosed “terrorist alert”, hmm?

During the 1970’s/80’s the current PM wasn’t shy about saying he planned to confine bulk-billing to pensioners and to the disadvantaged, with doctors free to charge any fee they liked. He said just pensioners and the "disadvantaged" should be entitled to free hospital care. Of course! A two-tiered health care system, just like in Bush's America: o­ne for HIS kind, and o­ne for the rest of us struggling bastards.

John W Howard, the "Battlers' friend"? What a grotesque obscenity!

Thirty years ago, more kids went to government schools, there was free tertiary education and massive investment in urban infrastructure - without road tolls. Today, the mean and tricky Howard Government has sold off critical infrastructure assets built up since Federation. These lost assets can no longer fund future generations, so the Government imposes higher taxes and charges. And continues to cut services.

With an election coming any time the PM decides to let us in o­n his secret (a bit like his invasion plan for Iraq, really) the Howard Government has cut taxes for the haves and raised some family payments, with little new spending o­n badly needed services.

So how about the breathtakingly cynical o­ne-off $600 bonus “family payment” the PM showered upon about 2 million households in pre-election bribes? After conflicting government statements, our kind, fatherly PM finally said there is no need for lucky recipients to return any overpayments because that would just cause “undue strain” o­n families.

Undue strain, Prime Minister? What a dramatic contrast to the aggressive government pursuit of recipients of common sundry Centrelink welfare overpayments. And Centrelink stuff-ups are a matter of course. It’s policy! God help the struggling single mum who suddenly realises the PM wants her to pay back thousands OR ELSE!

Ah, and then there’s the blighted and bruised unemployed.

Here's a thought: when’s the last time you heard any politician demand full employment and the policies and political will to achieve it?

Next time you feel like giving a dole bludger a biff, just remember there are 1.2 million Australians looking for 100,000 jobs at any o­ne time. I read somewhere that of that 1.2-million, about 650,000 are officially unemployed. Any day now, you could join them o­n John Howard’s human scrap-heap. What’s more, the Bureau of Statistics reckons there are another 620,000 workers who are in financial stress and looking for more work than they’ve got now.

Wait! What's that stink? Some 86% of the jobs created in the 1990s pay less than $26,000 a year, and 60% of those jobs created have been “casualised” and part-timed. It’s common knowledge o­n the unemployment frontline that the official rate of 5.6% is probably half the actual figure, because of the "hidden" unemployed, those scrapped workers who don’t fit the Howard government’s mean and tricky criteria for welfare support.

Unbelievably – and officially - if you work just o­ne lousy hour a week you are tagged as employed; and if you are o­n the dole and get forced into some temporary, ad-hoc ‘work-for-the-dole” scheme, you too are not counted among the official unemployed. THAT’S John Howard’s economic management credentials.

Its all farce, fraud and fuck-you-jack. Kill the poor!

Yes, there’s a war o­n all right. A war against the poor. Hell, it’s probably written into that bloody FTA with the USA. It’s all up for grabs, and not necessarily to the highest bidder. Y our health, your kids’ futures, your national identity. And it’s mostly done o­n the sly.

Here’s a far from comprehensive short-list of Howard government budget fiddles designed to avoid full disclosure of accounts to Parliament and to you and I:

Over 30 billions in GST is left out of Government taxation revenue to fudge the fact the Howard Government is the highest taxing government we’ve had since World War 2.

Telstra shares – remember them? - were overvalued by $7 billion in last year's budget to conceal the massive fall in Commonwealth net worth, which has dropped by $4 billion since 1996 – the year John Howard became PM - because of a $72 billion fire-sale of assets.

Realised foreign exchange losses of billions of dollars have been kept in the shadows since 2000. Under Senate pressure, the politicised Treasury finally admitted to $800 million realised losses in 2001/02: more than double that recently copped by the National Bank in its internal corruption scandals.

The stupid buy-back of government debt before maturity means a premium of up to 25 per cent above the face value of the debt has been paid. A 1999 Auditor-General's report showed that in two years these losses amounted to $935 million, but they may not be reported as a loss in the budget for up to 10 years! All we know is what is shown in forward estimates, that even though debt will be non-existent in 2006-07, we will still be paying $3.5 billion in interest expenses. That’s real sound fiscal responsibility, that! Bloody genius, that is!

Sure, it's so clear to me now: all I have to do is sell my house and I can pay off my mortgage!

Our piss-weak constitution at least provides that all Commonwealth money should be paid in and out of the Consolidated Revenue Fund. Until 1999 the fund was audited. Then John Howard made the fund vanish from public reporting, until it was mentioned briefly in 2003. THAT’S his economic management credentials!

In 2001, the harassed Auditor-General, checking the billion-dollar sale of Commonwealth offices, plaintively asked who was looking after the public interest in the unnecessary transaction? Howard’s politically-hobbled Finance Department answered that it was NOT charged with the role of protecting the overall "interests of the Commonwealth".

The Commonwealth? That’s you and I, you and your partner, your children, parents, siblings, relatives, friends and neighbours.

Before hungrily seizing his long coveted role as PM, John Howard o­nce declared "the things that unite us are greater than the things which divide us". When he said that, he wasn’t talking about Australians as a whole. He was addressing his small, greedy, small-minded constituency of robber barons and corporate pork-meisters.

Let’s make it clear: the Howard Government is not out there to protect you, financially or otherwise. It’s a private club, and you aren’t a member. You don’t pass GO. You don’t collect $200. But you do get to vote at some stage this year.

Use your pencils wisely. And - as our shameful PM would say - don't resile from that!

Peace? Is it too much to ask for?