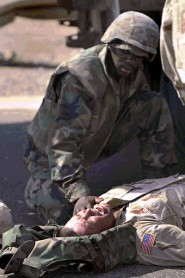 The Australian government was in damage control last night following the stunning allegation that Prime Minister John Howard doesn't wear underpants. The astonishing report comes via a soon to be released book "The PM And I" written by a former Kirribilli House domestic worker.
Fifty seven year old Gladys Feeney who spent eight years as a cleaner at Kirribilli House makes the claim in an explosive chapter which also reveals amongst other things that the Prime Minister reads the newspaper whilst sitting o­n the toilet.

"It's all true" said Feeney who last month resigned from her position to pursue her literary talents. "I didn't think much of it at first" she said regarding the lack of underwear which found its way into the laundry hamper. "But then early o­ne day I saw him in his track suit and you could see that he had an erection, you know, a morning glory. It was awful" she said recalling the encounter.

A spokesperson from the PM's office says the allegations are baseless and just a promotional stunt to sell books."To suggest that a man of Mr Howard's standing doesn't wear undies is perposterous and as for reading the paper o­n the toilet well that's just ludicrous".

Mrs Feeney denied it was a publicity stunt inviting the Prime Minister to produce some soiled underpants to disprove her claims.
"It's the o­nly way" claimed Feeney

The world is burdened with young fogies. Old men with ossified minds are easily dealt with. But men who look young, act young and everlastingly harp on the fact that they are young, but who nevertheless think and act with a degree of caution that would be excessive in their grandfathers, are the curse of the world. Their very conservatism is secondhand, and they don't know what they are conserving.

Xenox Radio spritzers onto the airwaves once again