Home  Local  HOWARD BLOWS LATHAM OUT OF THE ELECTION! 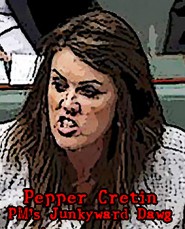 HOWARD BLOWS LATHAM OUT OF THE ELECTION!

At the official launch of the Coalition's 2004 Election Campaign PM John Howard unveiled fabulous new policies and confirmed himself as Australia's greatest PM ever.
He also promised that he would protect every red blooded Australian males right to see nekkid chicks rooting dogs!
That’s right. He is remaining resolute on the War on Terror and said he would not shirk from protecting Australia and it's way of life from those lunatic Muslims. And so that means that one-handed TV viewing can continue in our country.
Latham on the other hand wants to run away from these terrorists! Forget that loser!

PM Howard also said a lot of other stuff about technical schools, Doctors, and interest rates. But the main message is that he will fight all the Arabs in Asia so we can keep nekkid chicks on our TVs and Computers where they belong.

ps Whens that Max Gross v Patriot debate gunna happen? Is Max chickening out or what?

Need a name for your new band?

AUSTRALIA: THANK YOU FOR VOTING ME NEW PRIME MINISTER!